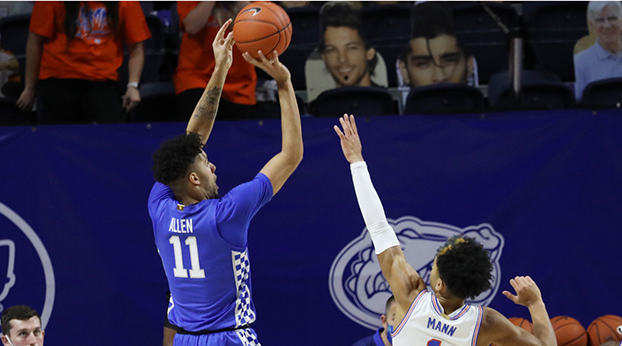 Dontaie Allen has given Kentucky fans hope for this season with his play in recent games.

Recently Kentucky coach John Calipari tried to compare the emergence of Dontaie Allen to former UK stars Shai Gilgeous-Alexander and Immanuel Quickley because they both did not emerge as standout players until the middle of the season.

However, the comparison is not quite the same. Gilgeous-Alexander started just two of UK’s first 15 games his freshman season before becoming the starting point guard, earned SEC Tournament MVP honors and being picked 11th in the 2018 NBA Draft.

Quickley also started just five of UK’s first 15 games last year. But like Gilgeous-Alexander, he played in every game he did not start. Plus he had played extensively as a freshman. Quickly blossomed into the SEC Player of the Year and became the 25th pick in the NBA draft a few months ago.

Calipari cited the patience both Quickley and Gilgeous-Alexander had before they became stars. Allen could not play last year due to injuries but played just 20 minutes in UK’s first seven games before getting 23 points at Mississippi State, 14 against Vanderbilt and six points against Florida. He’s 11-for-16 from 3-point range in the three SEC wins.

“I think he has given us hope with this team,” Keaton Belcher, Allen’s high school coach at Pendleton County, said. “We don’t know what might happen the rest of the year. COVID could wipe it out. Games get bigger and more exciting.

“Dontaie has become a fan favorite not only in Kentucky, but nationally. What he has done has been super for the whole state, but especially Pendleton Countians.”

Belcher knows many questioned Allen’s ability because of the level of competition Pendleton County played. He didn’t have an elite national schedule like prep teams play.

“But our schedule was not bad. We played in Marshall County Hoopfest. We traveled a lot to play teams in different regions,” Belcher said. “Him scoring a lot in college is not surprising to me but it probably is to an average fan for him to do it at this level. But he can shoot. Always could and always will be able to do that.”

Allen is not going to blossom into a first-round draft pick this year like Gilgeous-Alexander and Quickley did but he’s doing what he can to take advantage of his extended playing time.

“He’s a much more well rebounded in the game of basketball than people think,” Belcher said.

“I’m just glad people have been getting a chance to see that.”

He’s also intensely loyal. Teammate Brandon Boston was booed during UK’s win over Vanderbilt when he missed a shot.

“I don’t like that. That’s my teammate. That’s my brother. At the end of the day, I’m always going to have his back. I feel like everyone in BBN, everyone should be there for him and support him during this time because when he’s doing good, I think people are going to switch and they’re going to be supporting him,” Allen said.