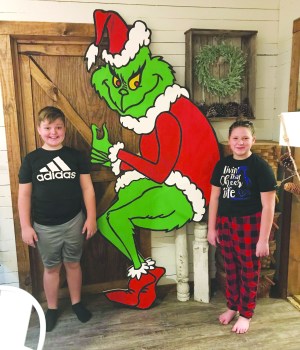 Josiah Gilbert, 10, and his sister, Cheyanne, 11, pose with the Grinch, which was JosiahÕs favorite part of the familyÕs Christmas decorations. - Photo submitted 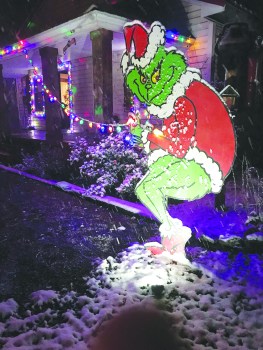 The Grinch was one of the key features of the Christmas decorations at the home of David Gilbert and his family. - Photo submitted

The first installment of Middlesboro’s “Magic City Lights” contest has come to an end, with the winners announced on the Recreation of Middlesboro Facebook page.

“We had a really good showing, we got about 50 houses,” said Middlesboro City Council member Boone Bowling. “It seemed like it really got people into the Christmas spirit and helped spread a little joy in the community at a much-needed time.”

Gilbert explained how they went about decorating their home.

“We actually hand-made our Grinch, and every character in our yard,” Gilbert said. “We made them out of plywood, cut them out and painted them.”

Gilbert explained their theme was the Grinch stealing Christmas. People would come by the home every night to look and take pictures of the display.

Gilbert said he, his wife Michelle Gilbert, daughter Cheyanne, 11, and son, Josiah, 10, intend to participate in the event every year.

Gilbert said they have been decorating the house for three or four years.

“My little boy loves the Grinch, so that’s what got us started,” Gilbert said. “I’d like to thank everybody for coming by and voting for us. We look forward to seeing them next year.”

The Shining Star champion, the contest’s business category winner, is Shumate Funeral Home which gathered a total of 61 votes. Second place in the business category went to Tim Short with 45 votes, and Coca-Cola took third place.

“We’ve always supported the community, and we wanted to support the efforts of the city council and Boone (Bowling),” Shumate said. “We just wanted to support what everybody was doing for the Christmas season.”

Shumate said the decorating was a group effort.

“Along with myself was Roger Hutton and James Browning,” Shumate said.

Shumate said they plan to participate in the contest in the future.

“We appreciate all the people who voted and all the people that made such nice comments, and Boone Bowling for his time and effort to put this event on,” she said. “It was a very nice community event that I think a lot of people enjoyed this Christmas season, especially when we couldn’t do a lot of things this year that we normally do because of the pandemic.”

According to Bowling, this is just the first installment of Magic City Lights.

“We’ll definitely be doing it again next year,” Bowling said.