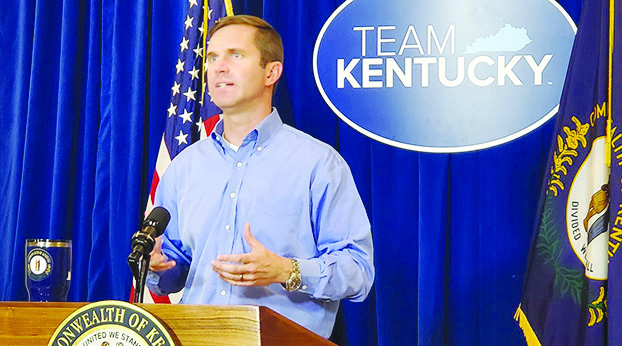 The legislature’s planned changes in the governor’s emergency powers will address “an institutional situation, not an individual situation” like Gov. Andy Beshear’s ongoing mandates during the coronavirus pandemic, Senate President Robert Stivers said on the eve of the 2021 session.

But House Speaker David Osborne said, “This is one of those things that inherently turns political,” and Beshear continued to object strongly to the legislature’s plans and characterize them as politically motivated.

Beshear, a Democrat facing a legislature with huge Republican majorities, reiterated Monday night that reducing his emergency powers while the virus is surging and hospitals are filling up, and the state is deploying vaccines, “would not only be a shame, it would be a tragedy.”

“It would basically be surrendering when victory is insight, and it will cost people their lives,” he said.

Beshear spoke in a recorded, hour-long interview on KET, which aired immediately after a live, one-hour “Kentucky Tonight” program with Stivers, Osborne and leaders of the House and Senate’s Democratic minorities.

Asked by host Renee Shaw what the Senate has in mind, Stivers said it will limit the extent and duration of the governor’s emergency powers. For example, some bills would require legislative approval of orders beyond 28 days.

Beshear said, “The idea that in a major emergency you’d have to get over 100 people, you know, by committee, to agree on the response means we would never act fast and swiftly and decisively enough. I’ve been willing to make the tough calls, each one being one of life and death, each one being unpopular. My only choices have been unpopular and unpopular. And if others want to sit in that seat, they ought to see what it feels like.”

Stivers said there will be times when the governor needs to act without legislative involvement, but the General Assembly needs to distinguish between “fundamental rights” that are protected in the federal and state constitutions “and operational functions.”

He said the Senate also plans legislation to change the law on administrative regulations, to provide more “notice and transparency,” because many of Beshear’s emergency orders have been vague.

Senate Democratic Leader Morgan McGarvey said he hoped Stivers was “not talking about any individual” and that the legislation was not aimed politically at the Democratic governor.

“I totally agree,” Stivers said. “This is an institutional situation, not an individual situation.” But he added that what McGarvey fears will be “probably something the House is going to introduce.”

Some House members have said the legislature should repeal the governor’s powers to close businesses during a pandemic, and some have proposed impeaching Beshear, which would put him on trial in the Senate for removal from office. He called that “silly.”

He said a governor must be willing to make tough decisions to keep people safe, unlike some in other states: “This isn’t the legislature versus the governor. It’s not Republican versus Democrat. It’s life versus death. And we should be able to rise above the politics to do the right thing here and to know emergencies are emergencies. They shouldn’t be political.”

House Democratic Leader Joni Jenkins said, “We have to be very, very careful that we’re not reacting or overcorrecting from what may be unpopular choices that the governor made.”

To that, Osborne said, “This is one of those things that inherently turns political . . . We do need a strong executive . . . and those emergency powers are very, very important to the successful operation of government, but that doesn’t mean they’re unlimited.”

Already, lawmakers have proposed six bills that would limit the governor’s executive powers, five in the House of Representatives and one in the Senate. And while they all offer some version of calling the General Assembly back into session if the governor issues an emergency order that last between 14 and 30 days, Sen. Chris McDaniel’s bill stands out because it calls for amending the state’s constitution, which would require Kentuckians approval via a vote in 2022.

McDaniel called it a “belt and suspenders approach, with the constitution being one and the statutes being another.”

“As long as we’re going to have a citizen legislature, the ability for the executive to act is going to be necessary,” McDaniel told Kentucky Health News. “But if it’s going to be longer than 30 days during the interim you’ve got something pretty serious and the General Assembly, as the people closest to the voters, ought to be consulted. And that’s why I’m proposing a constitutional amendment.”

Beshear said that such an amendment, if approved by voters in 2022, would result in an unlimited, full-time General Assembly.

“They get paid every day they’re in,” he said. “This legislature would be in every single day trying to run every aspect of the state. You want to talk about an idea that would allow people to enrich themselves every single day with no check on them, that would be it. But I tell you what, if they want to put that on the ballot, I think they should. Because I think the people of Kentucky will speak very loud and clear that a legislature shouldn’t be able to pay themselves for more days if they can’t get what they need to get done in the session.”

McDaniel said he is not proposing his amendment in response to Beshear’s shortage of communication with legislative leaders about the pandemic, but because Beshear’s orders “have proven to be so broad-ranging.”

He said that like some pardons issued by outgoing Republican Gov. Matt Bevin little over a year ago, some Beshear orders “exposed an underlying constitutional weakness. And this is something that should be undertaken regardless of whether it’s a Republican General Assembly, a Democratic governor or not. This is about who’s closest to the electorate, and that’s the members of the General Assembly. And so, I would like to think that you would have seen the exact same regardless of partisan makeup.”

Beshear, asked if he regretted not having more direct conversations with Republican lawmakers, especially around his executive orders that dealt with restrictions on businesses, in-person dining and school closures, Beshear said that is what he would call ‘playing politics’,” which he vowed not to do.

“I’ve made decisions based on the science, the science of how to stop this virus. Now if I’d spent my time just going back and forth with this party, or that party, or the legislature or the executive branch, you know, that’s politics in its purest form.

This required a response that is different,” Beshear said. “In the end, they’re going to come this session for blood because I defer to the scientists, it was the right thing to do and it saved lives and I’d do it again.”