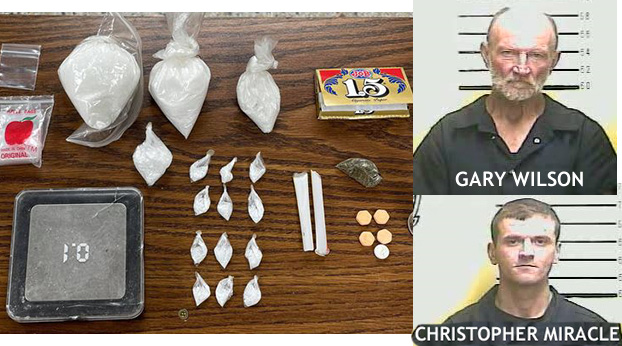 Two found with meth, other drugs

Two men have been arrested after Bell County deputies found them with drugs, including meth and marijuana.

Deputy Frank Foster and K-9 Deputy Adam Southern came upon an outdoor structure with one person inside Tuesday around 5:20 p.m., according to a release from the sheriff’s office. One person was standing inside the structure and another was just outside the entryway. When deputies contacted the men, they noticed a bag of marijuana and a clear container with several bags of suspected methamphetamine on a dresser in a makeshift bedroom.

The two people were identified as Gary Wilson, 58, of Pineville, and Christopher Adam Miracle, 34. Wilson was taken into custody after taking ownership of the items, and Miracle was found to have an outstanding warrant for his arrest. During Miracle’s arrest, he reportedly attempted to jerk away from the deputies while trying to conceal a bag of suspected methamphetamine.

After securing the suspects, a further search of the building revealed more bags of varying sizes of suspected methamphetamine with an approximate weight of 148 grams, which is just over 5 ounces. Suboxone, a bag of marijuana, digital scales, distribution baggies, and other drug paraphernalia were also found.

Both men were taken to the Bell County Detention Center. Wilson was charged with trafficking in a controlled substance – 1st degree, 1st offense (greater than 2 grams – methamphetamine); possession of marijuana, and buying/possessing drug paraphernalia.

Miracle was charged with possession of a controlled substance – 1st degree, 1st offense (methamphetamine), and he was served with the outstanding warrant for failure to appear in court.