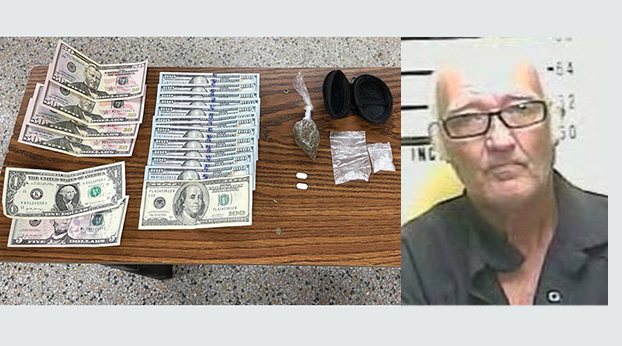 Money and drugs were found in the possession of Fred Whitehead when he was arrested Tuesday afternoon.

A Bell County deputy made an arrest for an outstanding warrant Tuesday and found more than he expected.
Deputy Frank Foster saw 69-year-old Fred Whitehead of Pineville walking on Highway 25E Tuesday afternoon around 3:30 p.m. Knowing that Whitehead had an outstanding warrant from a previous case, Foster stopped to arrest Whitehead.
A search of Whitehead led to Foster discovering a black case containing two bags of a crystal-like substance believed to be methamphetamine, weighing 3.3 grams, along with a clear bag of marijuana, and two white pills believed to be hydrocodone, according to a statement from the Bell County Sheriff’s Office.
Whitehead was lodged in the Bell County Detention Center and charged with trafficking a controlled substance-1st degree, 1st offense (greater than 2 grams-methamphetamine); possession of marijuana, and possession of a controlled substance-1st degree, 1st offense (drug unspecified).
Whitehead was also served the outstanding warrant.