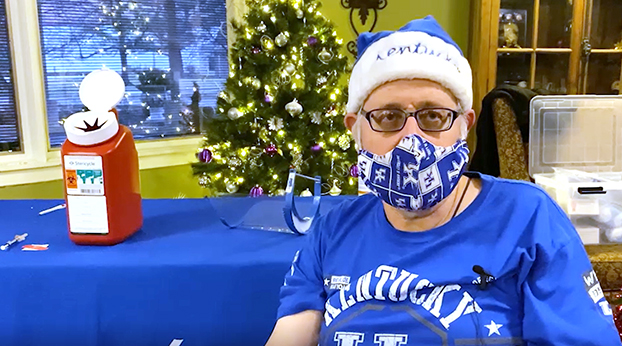 Joe Schroer, a resident of Louisville's Signature Health Care at Summerfield Manor Health and Wellness Center, was Kentucky's first nursing-home resident to get the vaccine, at 5:59 a.m. Monday.

Kentuckians 75 and older have a “very compelling argument” to be among those next in line to get vaccines for the novel coronavirus, Gov. Andy Beshear said Monday as vaccinations began at nursing homes in the state.
Last week, Beshear said that after nursing-home workers, staff and other health-care workers, the next group would be first responders and K-12 educators. Sunday, a Centers for Disease Control and Prevention advisory committee said the next group should also include people 75 and older, as well as workers key to the function of society, including teachers, police officers, firefighters, corrections officers and grocery workers.
Beshear said he is “actively considering” adding people over 74 to the next group because the CDC “makes a very compelling argument,” and in Kentucky, “our mortality rates are more attached to age” than in most other states.
More than 1,600 residents of Kentucky long-term-care facilities — skilled-care nursing homes, personal-care homes and assisted-living facilities — have died of Covid-19, two-thirds of the state’s overall total.
Because they are “by far the most vulnerable population that Covid-19 preys upon,” Beshear said as he announced that Walgreens and CVS began vaccinating nursing-home residents early Monday morning.

The mortality rate is so high, Beshear said, that the vaccine “will save lives, beginning today.” Vaccinations were given in about five nursing homes, chosen by Walgreens and CVS, which have federal contracts to handle vaccinations in long-term care.

Among the sites tomorrow, Beshear said, will be the Thomson-Hood Veterans Center, a state long-term care facility that has lost 34 residents to Covid-19 in the last two months, after keeping the virus out for eight months.

“It is heartbreaking, and it shows . . . why it is important to start with them,” Beshear said. About 20,000 people live in Kentucky nursing homes and another 5,000 are in personal-care homes and assisted-living homes.

Beshear said the state hopes to get all long-term-care residents and staff vaccinated by March 1. Both vaccines approved so far require two doses for full effect, the second about three weeks after the first.

Health Commissioner Steven stack said, “If we can immunize all persons in this state over the age of 70, we can prevent almost three-quarters of the deaths, probably.”

In deciding the order of who can get the vaccines, “We’ll be very thoughtful and methodical in this,” Stack said. “It is going to take three to four weeks to get this up and running.”

Beshear concluded, “Every death between now and the end of this is avoidable.”

Numbers: The pandemic’s metrics remained stable, and for the second week in a row, the number of new cases was lower than the week before. But Monday’s 1,988 new cases were more than any of the last three Mondays, and raised the seven-day average for the first time in 10 days, to 2,788.
Kentucky Health News asked Beshear and Stack if that reversal might have been an initial result of reopening restaurants and bars a week ago — or an effect of virus spread from Tennessee, where recent infection rates have been among the highest in the nation, since the two Kentucky hospital regions with the longest Tennessee borders are the only ones with more than 80 percent of their intensive-care beds occupied.
Beshear referred the question to Stack, who talked mainly about Tennessee, where restrictions have been fewer. “There’s multiple things at play. Tennessee is in not good shape,” he said. “They could really escalate even further after the Christmas and New Year’s holidays . . . We are in a sea of red coronavirus, and we are a relative calm in the middle of the storm,” which he said is a result of people complying with Beshear’s restrictions.
Stack noted a story in The Washington Post that said every state but Kentucky has more intensive-care unit beds in use than three months ago. He said hospital numbers have been flat for the last few weeks, partly because hospitals have been limiting admissions for non-urgent procedures.
Kentucky hospitals reported 1,580 Covid-19 patients Monday, the fewest in a month, with 411 of them in intensive care and 231 of those on ventilators. The share of Kentuckians testing positive for the virus in the last seven days is 8.64%, down a bit from Sunday and about average for the last 10 days.
“The positivity rate and new cases all seem to indicate we have done what we hoped to accomplish,” Stack said. “So now the ball’s in your court again. We gotta get through the next two weeks and not cause a horrible, self-inflicted wound . . . You can’t be getting together in private gatherings with more than eight people.”
Beshear said, “Please limit your gatherings, limit your travel, even in and around Christmas.” He, Stack and Dr. Ashley Montgomery-Yates, who treats Covid patients at UK Healthcare, urged Kentuckians to also wear masks, wash their hands and keep six feet away from others, even when wearing masks.
“I tell people I go into the Covid unit every day,” Montgomery-Yates said. “I’m not afraid of the Covid virus; I just know how to prevent its spread.” Referring to the arrival of vaccines, which won’t be widespread for months, she said, “We can see the light at the end of the tunnel, but we’re not there yet.”
Beshear, asked about U.S. Sen. Rand Paul’s statement that cloth masks are largely ineffective, said, “Every health-care professional that deals with this virus says to wear a mask.” He said Paul’s latest contrarian statement is “just baffling, really, because these are issues of life and death.” He said that as a senator, “You serve the people, not yourself, and I’d really like to see Senator Paul encourage people to do the right thing.”
Stack added that research now shows that masks also protect those who wear them “pretty substantially,” in addition to keeping them from spreading the virus, which they can do without having symptoms.
Dr. Anthony Fauci, director of the National Institute of Allergy and Infectious Diseases, said on the “PBS NewsHour” that people should “limit travel to the extent possible and try, when you have indoor settings,” that they be with people in whom they have “confidence that they’re being very careful.”
Kentucky Health News is an independent news service of the Institute for Rural Journalism and Community Issues, based in the School of Journalism and Media at the University of Kentucky, with support from the Foundation for a Healthy Kentucky.