Struggles continue for Wildcats in loss to rival Louisville 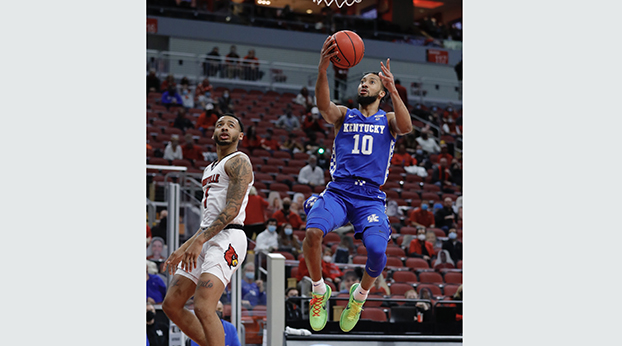 The struggles continued for Kentucky on Saturday.

The Wildcats suffered their sixth consecutive setback with a 62-59 loss to rival Louisville in the KFC Yum Center. The Cardinals ended a three-game losing streak to Kentucky and held off a late surge by the Wildcats, who edged the Cardinals a year ago in an overtime thriller at Rupp Arena.

Kentucky (1-6) trailed 60-59 with 18 seconds remaining, but missed two shots down the stretch that could have led to a different outcome. Olivier Sarr’s jumper from the right baseline spun rattled out with eight seconds remaining, while BJ Boston missed a long 3-pointer as time expired. The sixth straight loss was the first for the Wildcats since the 1988-89 season.

“We had our chances,” coach John Calipari said. “We still missed some layups and some free throws, but we fought. .. We had our chances to win. That ball went in and out and it’s like buzzard luck for my man (Sarr). This is one of those kind of experiences for the team. We’re trying and we’re getting better, but losing stinks, just stinks.

“We’ve got to right the ship at some point and then we’ve got to start rolling over people. But, right now, we’ve got to try to steal one, win one and dominate somebody and then start moving on.”

The Wildcats went through six ties and 10 lead changes before the Cardinals took control down the stretch and built a 56-49 lead with four minutes remaining. Unlike its previous five losses, Kentucky didn’t fade away in the closing minutes and had a chance to end the skid.

“There are no moral victories and we lost,” Calipari said. “Hats off to Louisville. They played well. Our margin (for error) is not high. We’re not beating people by 30 (points). … I thought we were better at the end of the game because we put a major focus on how we were going to play down the stretch. We scripted it and we did it over (and over). When you’re struggling there has to be clarity.”

The Wildcats were mostly without guard Terrence Clarke, who suffered an undisclosed foot injury in practice last week and only played 16 minutes, including 10 in the first half.

“He’s playing at 80 percent, maybe,” Calipari said. “It (is) the same injury that Ashton (Hagans) has and this is the same thing. Ashton played with it, but it’s hard and it’s painful. You have to get treatment and play through pain and that’s just how it is.”

Davion Mintz led the Wildcats with 19 points and made four of the team’s five shots from long range. Mintz also grabbed seven rebounds.

“It wish it would have turned out our way, but I feel like right now it’s a necessity for me to be that guy, be the voice and talk on both sides of the floor,“ Mintz said. “This is a lot bigger than me. We all want to win. None of us would have imagined this. We just keep fighting, we’ve just got to keep fighting. At this point, we kind of throw away our record in our minds and we just go out there and play basketball and, like coach said, refuse to lose at this point.”

Calipari has been pleased with Mintz and his leadership skills.

“Davion is one of the guys I’ve been really proud of,” he said. “He never said a word (about playing time) earlier this year.

He just took his role, ‘Tell me what you want (me to do).’ He is so appreciative of this opportunity to be here, playing here and playing for us. He’s in a different mindset, which is why you continue playing the way you are playing.”

Despite the loss, Calipari insists he’s having fun and added the Wildcats “have a chance to paint our own picture.”