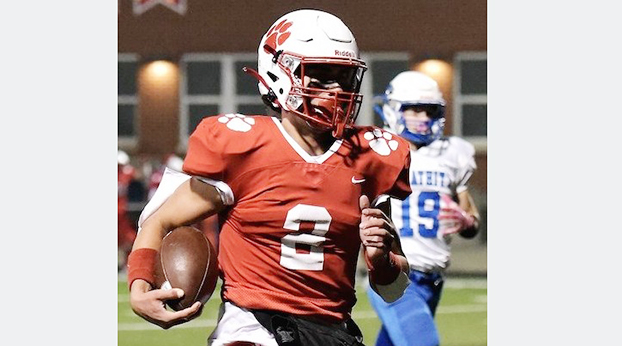 Hergott led Beechwood to the Class 2A state championship this season and a 10-2 record. He passed for 2,467 yards and 26 touchdowns as the Tigers won their 15th overall state title.

During Beechwood’s 24-23 overtime win against top-ranked Lexington Christian in the Class 2A state championship game, Hergott passed for 154 yards and a pair of touchdowns. He also gained 97 yards on the ground in that victory.

A dual-threat quarterback, Hergott rushed for 1,078 yards and 15 touchdowns this fall. He gained 240 yards on just 10 carries and scored three touchdowns during a 52-7 win over Breathitt County in the Class 2A playoffs this season.

Hergott emerged as one of the state’s top quarterbacks this season, both passing and running the football. He combined those two skills late in the fourth quarter of the state semifinals as the Tigers pulled out a 35-34 win at West Carter.

Trailing 34-27 late in the game, Hergott connected with Brady Moore for a 34-yard touchdown pass with 2:32 remaining to pull the Tigers to within 34-33. Hergott then somehow eluded multiple West Carter defenders on the ensuing two-point conversion play to find Moore for the go-ahead score at 35-34.

In addition, Mercer County’s David Buchanan was named the Coach of the Year by the KFCA on Sunday.

Beechwood finished the season with eight consecutive wins. The Tigers, who captured 14 state titles at the Class 1A level, won their first championship in Class 2A this season.