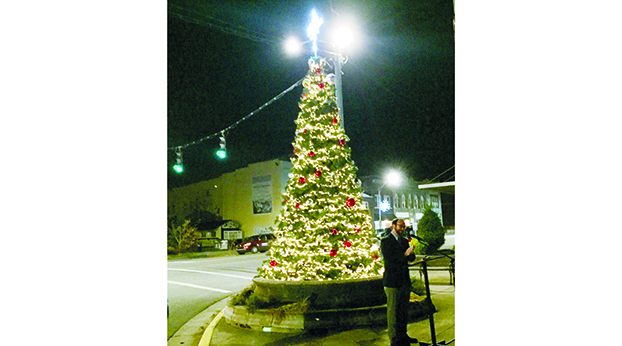 The lights of the city’s Christmas tree come to life as First Baptist Church Pastor Zachery Bay speaks on the meaning of Christmas during a lighting ceremony on Friday. - Photo by Joe Asher

The Christmas season got into full swing in Middlesboro on Friday, as the city held a ceremonial lighting of its Christmas tree.

Unlike holiday seasons past, this year saw a toned-down ceremony due to the current COVID-19 pandemic. However, there were still many familiar highlights. The lighting took place at Fountain Square in front of the ARH Apex Center.

Middlesboro Mayor Rick Nelson explained the specifics of the ceremony took a little time to sort out.

“We talked to some folks that we were counting on to be a part of it, and we got the OK,” Nelson said. The ceremony took place at 6 p.m. on Friday and was broadcast live.

“We were very fortunate to get Zachary Bay, the pastor at First Baptist Church in Middlesboro,” Nelson said.

In addition to Bay, music was provided by First Baptist Church Choir member John W. Parker and Beth C. Parker, the minister of music at the church.

Nelson explained the program was intended to last about 15 to 20 minutes, consisting of the reading of pertinent scripture and a couple of songs.

“I know it’s not as much as we’re used to,” Nelson said. “But everybody’s having to scale back a little bit. We’ve got a beautiful Christmas tree, and since we put all LED lights in all of our Christmas decorations they look a thousand times better. We’re going to try to make it as Christmassy as we can.”

Nelson pointed out the city had planned on a parade and other events, but due to the pandemic plans had to be changed. He also mentioned the city’s refurbished snowflake decorations that line the streets of Middlesboro.

“We’ve got snowflakes from about 24th Street all the way to KFC,” Nelson said. “The LED bulbs, I can’t believe how nice they are. It’s a pretty scene downtown.”