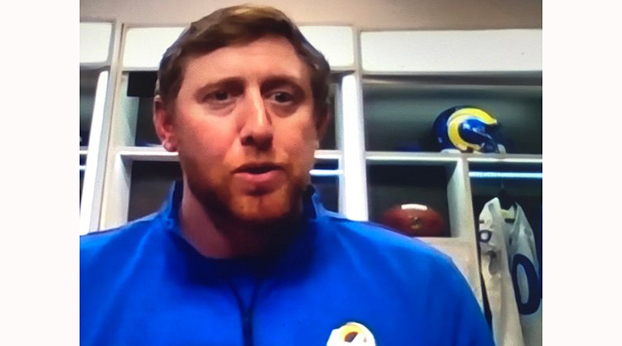 Kentucky offensive coordinator Liam Coen talks to the media during a zoom call on Tuesday. - Photo by Keith Taylor

Before seeking a new offensive coordinator, Mark Stoops envisioned what he wanted Kentucky’s offense to look like in the future.

“I had to clearly think out my vision, you know, for the program as we move forward and what exactly we wanted it to look like,” Stoops said Tuesday. “There’s many different styles that you can go within today’s day and age with college football. But I also had to, you know, go with something that I was comfortable with as well and something that could mesh with the good things that we’ve been doing and what we wanted to look like as you move forward.”

It took Stoops less than two weeks to find a replacement for Eddie Gran. He settled on Los Angeles Rams assistant coach Liam Coen. It was the Rams’ innovative offense and creativity that caught the attention of Stoops.

“I had an opportunity to visit with many different people, many different styles of offense, but I was very attracted to Liam right from the start,” Stoops said. “It started with our research. And then obviously the people that I know in L.A. and the people connected in our profession just spoke so highly of him.  Coach (Sean) McVay and others had many good things to say about him. So it kind of rolled from there.”

The feeling was mutual and Coen said Stoops “had a vision from the beginning in terms of what he was looking for and didn’t stray from it at all,” which impressed Coen.

“I’ve always said that it would take really a special job and opportunity for me to leave the Rams,” he said. “A couple of things have come up the last few years, but being the offensive coordinator at the University of Kentucky is one of those special positions that I just had to take. And there was no chance to be able to turn this thing down.”

Coen plans to build on the foundation laid by Gran and take the offense to a new level while maintaining a solid running attack on the offensive side of the ball. He defined the relationship between the run and the pass as a partnership similar to a marriage.

“Everything starts with the quarterback, but also it starts up front and we’re going to be able to run the football,” he said. “That’s something (Stoops) wants to do on a week-to-week basis as part of our core philosophy (of) running the football. And I continue to  plan to continue to do so at Kentucky and but truly marrying the run and the pass, being able to put pressure on the defense and make them defend every blade of grass.”

Coen spent the past three years with the Rams and currently is assistant quarterbacks coach for the organization. Coen has worked with Rams quarterback Jared Goff, one of the top signal-callers in the National Football League. He was part of the Rams’ staff that reached the Super Bowl in 2018. He will remain with L.A. through the playoffs and can’t wait to return to college coaching.

“To be able to be coming to the top conference in college football at a place like Kentucky is just a dream come true,” he said.

McVay said Coen has proven to be “a great communicator, coach, and leader of men.”

“He will do great in leading the way for what will be a fun and exciting offense that will accentuate the players’ skill sets,’ McVay said.