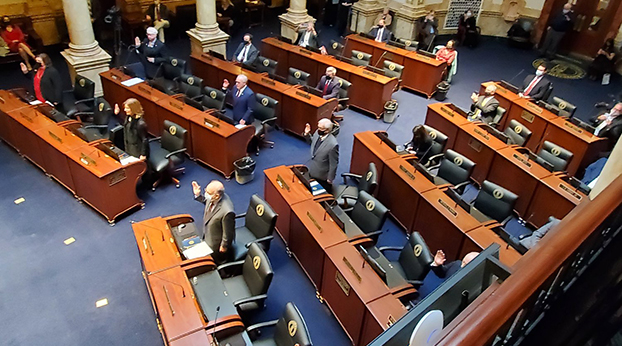 Kentucky's members of the electoral college are sworn in Monday before casting votes for the President Donald Trump-Vice-President Mike Pence ticket. - Photo by Tom Latek/Kentucky Today

Just like every other state in America, Kentucky’s members of the electoral college met to cast their votes for President and Vice-President on Monday.

Kentucky had eight electoral votes in the November General Election, one for the two U.S. Senators and one for each of the six Congressional seats in the state, as set forth in the U.S. Constitution.

While the electors normally cast their votes in the Kentucky Supreme Court chamber of the Capitol, this year it was in the state Senate to help maintain social distancing due to the COVID-19 pandemic.

Secretary of State Michael Adams, who presided over the event, offered some introductory remarks, which included items he’d like to see enacted during the 2021 General Assembly, which gets underway on Jan. 5.

“I intend to offer legislation to make it even easier to vote, but also even harder to cheat, to move Kentucky toward universal paper ballots, to expand post-election audit practices, and to more efficiently keep our voter rolls up to date,” he said.

Adams also told the electors they are members of an exclusive club, which consisted of 538 people nationwide on Monday. “Prior to today, only 23,507 electoral votes have been cast in the 231 years of the American Constitution.”

One of the electors was Ellen Williams, who is a former chair of the Republican Party of Kentucky, and in fact, was chosen as chair of the electors. She told Kentucky Today that she was grateful to participate. “I’ve gotten to do a lot of things in the Republican Party at the state level and the national level and to be a representative, one of eight votes that Kentucky cast in this general election for President, was amazing. It was quite an honor.”

Williams says this was the first time she had served as a member of the electoral college. “It’s really cool. I have the certificate being framed right now. I don’t often frame these things, but this is historic and memorable.”

Since Donald J. Trump and Mike Pence carried Kentucky, the eight electors unanimously voted for the two members of the Republican ticket.