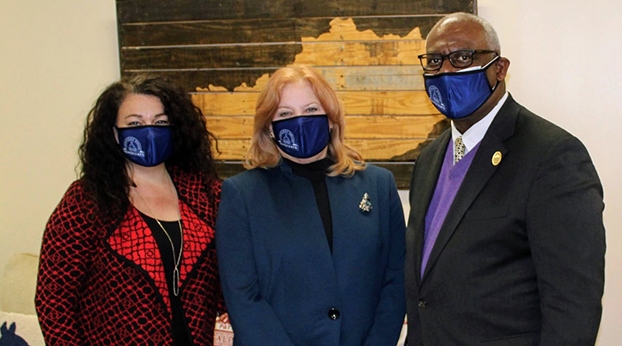 Rep. Joni Jenkins of Shively will continue as caucus floor leader, a role she assumed last December when she became the first woman in the General Assembly to lead a legislative caucus. This followed the resignation of Rocky Adkins from the House to become a top aide to Gov. Andy Beshear. Jenkins had previously served a year as caucus whip.

“I want to thank our fellow House Democrats for putting their confidence in me and our leadership team,” Jenkins said. “I have thoroughly enjoyed this work and am excited about the next two years. Because of COVID, we face unprecedented challenges as a state. Our caucus has the ideas and the drive to move the commonwealth forward, and that’s exactly what we will do.”

Rep. Derrick Graham of Frankfort will serve his second full term as caucus chair, extending his tenure as the first Black legislator to serve in House leadership.

Rep. Angie Hatton of Whitesburg will keep her title as caucus whip, which she was elected to last December. She and Jenkins are the first two women caucus leaders to serve simultaneously in the Kentucky House.

“I am proud that our caucus looks like Kentucky and that our leadership team represents every aspect of it, from urban to rural,” Graham said. “We’re committed more than ever to helping all Kentuckians. We look forward to working with Gov. Beshear and our colleagues across the aisle and the Capitol whenever possible, but stand ready to oppose any policy that moves Kentucky in the wrong direction.”

Hatton thanked her colleagues for extending her term. “Our caucus is both dynamic and diverse and brings a lot of real-world experience and expertise to the Capitol. Together, we will do all we can to keep improving public education and the health and well-being of our citizens, especially as we work to overcome the COVID pandemic and the devastating impact it has caused.”

Republicans will outnumber Democrats 75-25 in the House when lawmakers convene on Jan. 5 for the 30-day legislative session.