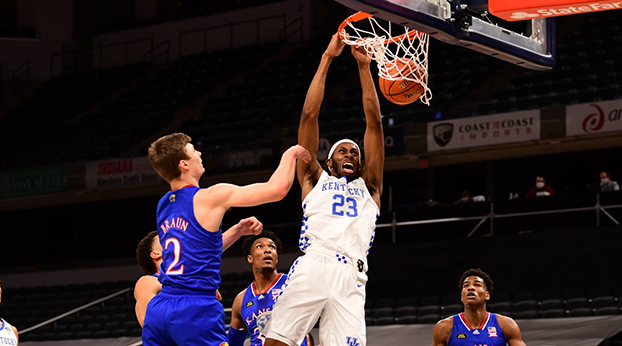 Following a disappointing 76-64 setback to Richmond Sunday, the Wildcats dropped a  65-62 loss to No. 7 Kansas in the State Farm Champions Classic at Bankers Life Fieldhouse in Indianapolis. The Jayhawks (2-1) fended off Calipari’s squad despite shooting 29 percent from the field, including a 23 percent clip from the 3-point line.

“If I was (Kansas coach) Bill Self, I would be so happy, because my team was held to 29 percent from the floor and 23 percent from the three and we win. I love those games — just a slog it out (contest),” Calipari said.

Kansas did most of its damage in the second half and took advantage of Kentucky’s inability to make shots. The Wildcats shot just 26 percent in the final half and connected on just two 3-pointers on 14 attempts from behind the arc. Kentucky (1-2) went through long stretches without a field goal, which proved costly down the stretch.

“They punked us,” Calipari said. “We couldn’t even bring in the ball. All they did was went after people, and guys (thought) it just wasn’t all that important. We have to learn.”

Despite the struggles, Kentucky had a chance to tie the score at the buzzer, but a 3-point attempt by Davion Mintz bounced off the back of the iron. Just as they did against the Spiders, the Wildcats had trouble scoring from long range and connected on just three of 21 shots.

Although another loss, Calipari said it’s “all part of the growth of this” and is hopeful the setback will lead to better results in the future.

A big problem for his squad, Calipari said, is turnovers. The Wildcats had 16 miscues against the Jayhawks, including 13 by guards Devin Askew, BJ Boston, Terrence Clarke and veteran Davion Mintz. He added an inability to rebound in critical moments also hurt his team’s chances.

“That’s what we need to learn,” Calipari said.  “You can’t have an excuse. This is a no-excuse program. You want to make excuses, you shouldn’t be here versus you figure it out and you go.”

The Wildcats missed their six shots, but then made three in a row and pieced together a 15-0 for a 17-5 advantage with 11 minutes remaining in the first half. Kentucky pushed the margin to 13 at 28-15 before the Jayhawks pulled within 35-29 at the break.

Jackson also was active on the defensive end and collected four of Kentucky’s seven blocks in the opening half. Overall, the Wildcats collected 12 blocks, paced by Jackson with eight.

Boston and Mintz led the Wildcats with 12 points each.

“We did some good stuff, we should have won the game,” Calipari said. “I’ll put it on me. We should have done different things, We hit the skids offensively and I’m trying to figure it out — how to get a good shot and figure it out for the kids. I will.”