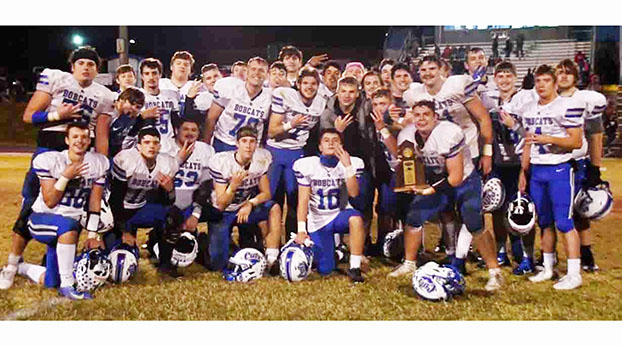 The Bell County Bobcats claimed the District 5 championship trophy after their 13-6 win Friday at Rockcastle County. - Photo by Misty Dean 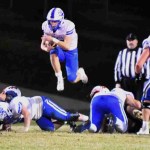 Bell County’s Brandon Baker goes airborne on the way to a big gain in Friday’s 13-6 win over Rockcastle County. Baker ran for 179 yards and scored two touchdowns in the victory. – Photo by Misty Dean

Now with 22 on his resume, district championships aren’t at all unusual or unexpected for Bell County coach Dudley Hilton.

There was something special, however, about Friday’s 13-6 win at Rockcastle County that gave the Bobcats their second straight district title, beginning with the fact that it avenged a 13-7 loss on Oct. 2 in Mount Vernon.

“We lost a good bunch of boys last year and they had a lot coming back, so we knew they would be a good football team,” Hilton said. “Our boys hadn’t played at Rock and didn’t know what kind of place they were going to, I guess. We didn’t play that well the first time, not to take anything away from them. They have a good football team. I had been there before, but they hadn’t. I think they knew what to expect this time.”

Bell (6-3) used a dominating defensive effort to earn the win, holding the Rockets to one touchdown along with 167 yards on the ground and 102 through the air as Noah Parkey was limited to five-of-13 passing.

“Coach (Scott) Parkey’s son is a great quarterback. I thought we did a great job on him and held him in check,” Hilton said.

The Bell defense set the tone for the game on the Rockets’ second offensive drive when Rockcastle had a first-and-goal on the Bell 1. Hayden Callebs forced a fumble that Cameron Burnett recovered.

Rockcastle took the lead early in the second quarter when Chris Mink went in from the 1 with 10:40 left in the first half.
Brandon Baker answered with a 9-yard TD run with 1:49 to play in the half. Austin Dean’s extra point put the Bobcats ahead by one.

Baker broke free for a 75-yard run 18 seconds left in the half. The extra point attempt failed, but Bell took a 13-6 lead into the break.

Baker led the Bobcats with 179 yards rushing on 18 carries. Daniel Thomas added 42 yards on seven carries. Ethan Raby contributed 25 yards on five carries while leading the Bell defense with 12 tackles, including seven solo stops. Raby also forced a fumble and recovered it in the fourth quarter. Baker also had a fumble recovery.

Bell County will travel to Belfry (7-3) on Friday with a regional championship on the line. The game will also match two of the state’s all-time coaching greats with Hilton against Belfry’s Phillip Haywood. Hilton is second in state history in wins with 399.

Haywood is first with 456 victories.

“They are solid. They get so many new names in there every year, but I’m not accusing anybody. They reload with players who played somewhere else, and that really makes a difference in their school, but they do a great job. Phillip stays with the basics.

They line up and play, and they are a big football team,” Hilton said. “They have won nine of the last 11 state championships. He has a tradition-rich football program, and that’s what you are looking at more than anything, including the coaching situation. But we’ve had some battles. There’s no question about that.”