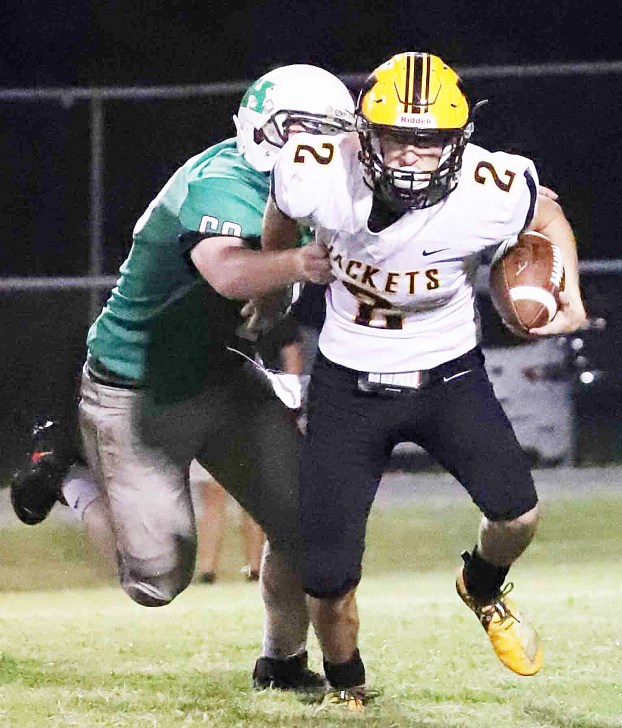 Middlesboro freshman quarterback Cayden Grigsby battled to break away from a Harlan defender in the season opener. (Kim Henson photo)

The Middlesboro High School Yellow Jacket football team had its chance at a playoff run cut short on Wednesday when Superintendent Waylon Allen announced that the season would be cancelled due to COVID-19 exposure affecting most of the team. The unfortunate and untimely end to the season does not spoil the team and individual accomplishments of Larry French’s squad that finished 6-1 on the season.

MHS earned its spot in the Class 2A playoffs as the two seed out of District 7 by defeating Harlan, Pineville, Morgan County, Leslie County, Knott County Central, and Martin County on the year. Their lone loss came against district foe Breathitt County.

Their RPI was eighth-best statewide in 2A and second when ranking against KHSAA’s 13th Region, trailing only Corbin.

While playing through the challenges of the 2020 season, the Middlesboro offense racked up 1,729 total yards of offense in six games played. On the year, Middlesboro totaled 178 total points for an average of 2.7 per game. The defense held their opponents to just 80 points on the year equaling 13.3 per game which was fifth-best statewide in 2A. Further, Middlesboro held their opponents to 123 yards per game on the ground, and just 56 through the air – both top five averages statewide. Middlesboro’s scoring margin of 16.3 points per game proved seventh-best in 2A.

Individually, Middlesboro’s rushing duties were handled by committee with Caleb Bogonko leading the team with 424 yards in six games. Riley Gent (224 yards), Ethan Barton (195 yards), Cayden Grigsby (171), and Eric Helton (170) all carried the ball over 40 times throughout the season. Middlesboro played three quarterbacks on the year with Eric Helton leading the Jackets with 300 yards passing and Cayden Grigsby adding 150 more. MHS utility Ethan Barton led the Jackets in total scoring with 52 points scoring three rushing touchdowns, two receiving, one interception return, and two kick-off returns. Defensively, MHS was led by Tyler Kelly who had 46 total tackles including four tackles for loss from the linebacker position. Riley Gent added 37 tackles on the year. Throughout the season, Middlesboro was able to apply pressure to opposing quarterbacks. Jay West had seven sacks on the year which was second-most in 2A. Jacob Heck, Yousiff Nabat, Jalil Patterson-Graves, and Caleb Bogonko all recorded multiple sacks on the year. Coach Larry French added six wins to make it 336 for his career.

Middlesboro will return key pieces from this year’s team including linebacker Tyler Kelly, tackle Zach Tong, edge Jay West, and quarterback Cayden Grigsby. When the 2021 season kicks off, it will be the Jacket’s centennial season for the program which began play in 1921.

The opening of Kentucky’s high school basketball season has been delayed because of the COVID-19 pandemic. The Kentucky High School... read more