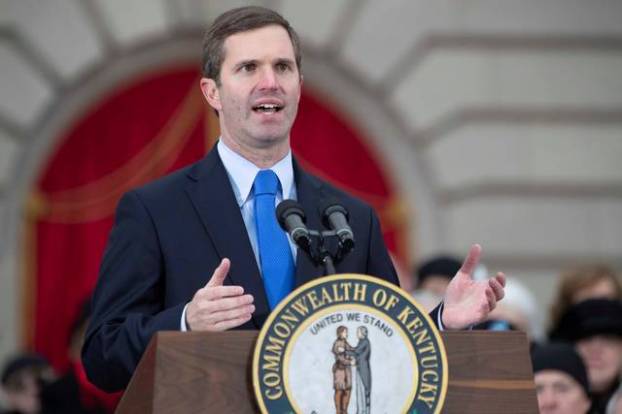 Gov. Andy Beshear said there was another Monday record for the number of new cases of the coronavirus in Kentucky.

There were 2,135 new cases reported to state public health officials, he said. “Remember, Mondays are always out lowest day.

That’s because not all of the labs are open on the weekend. This is our highest Monday, by a significant amount.”

This brings the total number of positive cases in Kentucky to 160,232 since the first one was reported on March 6.

Beshear said there were more than 20,000 cases last week, which was another record. “This was 3,000 more cases than the previous week. Do you remember how shocking it was when we had 3,000 cases in a single week? It took us from March 6 to July 19 to have a week with 3,000 cases total. This is exponential spread. It will, and it is, overwhelming us. It’s why we must take action.”

He said the spike in cases is engulfing Kentucky’s hospital system. “When we have the Louisville hospital system pausing elective surgeries right now, it’s that bad. We have Pikeville Medical Center, we have King’s Daughters, we have the Bowling Green hospital system telling you they’re already struggling. St. Elizabeth’s in northern Kentucky, talking about the same concerns. What happens if we double in two weeks with a system that is already facing these problems? The answer is, not only do more people die, more people die than they have to.”

A total of 1,573 Kentuckians are currently hospitalized due to COVID-19. Of them 391 are in the ICU and 203 on a ventilator. The state’s positivity rate, based on a rolling average over the past seven days, dipped below nine percent Monday, to 8.97%.

“Contact tracing has a number of different purposes: case investigation, helping connect Kentuckians to helpful resources they need, contact notification and providing information about quarantining,” said Dr. Stack. “Recent models show that just for Jefferson County and 14 surrounding counties, if we had complete compliance with new requirements, we could prevent almost 1,000 additional deaths by mid-January. Even with low compliance, 513 deaths would be prevented.”

Kentucky Utilities customers will see an increase in their monthly bills by more than 10.5% in 2021 if its rate... read more