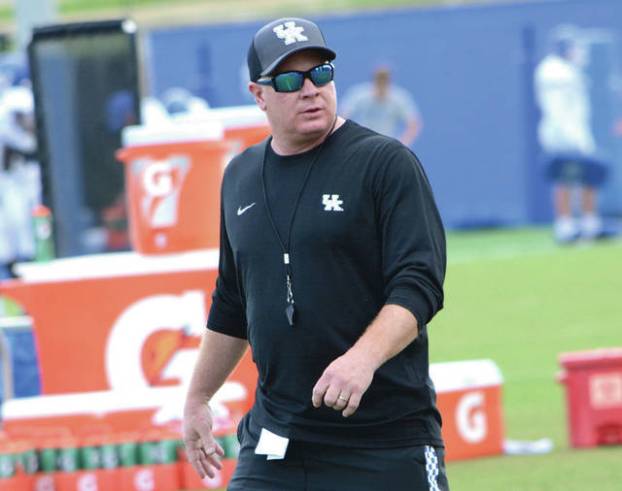 Shorthanded Cats had no chance against Bama

Kentucky never really had a chance at No. 1 Alabama Saturday when it was missing 10 players, including leading rusher Chris Rodriguez and leading tackler Jamin Davis, due to COVID-19 protocols.

However, it was no surprise that Kentucky coach Mark Stoops made no excuses before or after the 63-3 loss, the biggest loss in his time at UK. Maybe that’s a characteristic Alabama coach Nick Saban liked years ago when he tried unsuccessfully to recruit Stoops.

“Cardinal Mooney High School in Youngstown was part of my recruiting area for a long, long time. All the Stoops brothers came through there,” Saban said last week. “That’s where they went to school. Their dad was the defensive coordinator there.

“Even though they all ended up at Iowa, we still tried to recruit him at Michigan State when I was at Michigan State. Don Bucci was the coach and Ron was the defensive coordinator, which was their dad, who I had a really good relationship with.”

It was not just Mark Stoops that Saban tried to recruit unsuccessfully.

“Vince Marrow, who’s on his staff right now, also was a player that we recruited from Cardinal Mooney and didn’t get,” Saban said. “His brothers all went to Wisconsin . I’m kind of admitting I wasn’t a very good recruiter back in those days.”

Recruiting is no problem for Saban now, one reason Stoops said he not only is the nation’s best coach now but one of the best of all-time as he aims for another national title this year.

Stoops is trying to keep his 2021 recruiting class together and signing day approaches. He knows it has been different for everyone recruiting with the COVID restrictions.

“We have to do the best we can at building relationships through Zoom and phone calls the best way we can. Fortunately, with this class we already had some personal relationships from the years we have been recruiting them and them being on campus maybe as freshmen and as sophomores,” Stoops said.

The Kentucky coach feels like UK is in “good shape” recruiting despite UK’s 3-5 record and lack of consistent offense.

“I feel like we have a strong class and we have to continue to build on it the best we can to get it to the finish line,” Stoops said.

The 2020 Levitt AMP communities were announced Friday, and Middlesboro is ecstatic to be part of the mission of the... read more