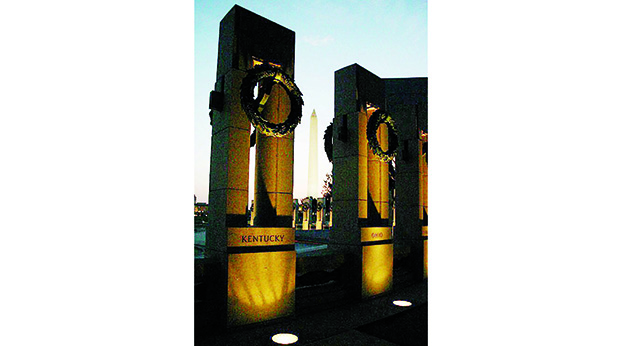 The World War II Memorial in Washington, D.C., is just one of the monuments that pays tribute to those who have served the United States in the nation’s armed forces. - Photo by Jeff Moreland

Today, Nov. 11, is Veteran’s Day, a day set aside to honor those who have served the United States in the military.
Bell County Judge-Executive Albey Brock expressed appreciation for veterans.
“Our veterans are often so underappreciated,” Brock said. “I want to say a heartfelt thanks to all who have served and are serving today here and abroad.”

Middlesboro Mayor Rick Nelson credited veterans for their sacrifice.
“As a non-veteran I can tell you that we appreciate our veterans very much,” said Nelson. “That these men and women would be willing to sacrifice their lives so that we could be free is a credit to their character.”

The origins of Veterans Day descend from President Woodrow Wilson’s proclaiming Nov. 11, 1919, as the first commemoration of Armistice Day. Wilson’s proclamation stated, according to the U.S. Department of Veterans Affairs website, “To us in America, the reflections of Armistice Day will be filled with solemn pride in the heroism of those who died in the country’s service and with gratitude for the victory, both because of the thing from which it has freed us and because of the opportunity it has given America to show her sympathy with peace and justice in the councils of the nations…”

The date of Nov. 11 does have significance. According to the Veterans Affairs website, “World War I – known at the time as

“The Great War” – officially ended when the Treaty of Versailles was signed on June 28, 1919, in the Palace of Versailles outside the town of Versailles, France. However, fighting ceased seven months earlier when an armistice, or temporary cessation of hostilities, between the Allied nations and Germany went into effect on the eleventh hour of the eleventh day of the eleventh month. For that reason, November 11, 1918, is generally regarded as the end of “the war to end all wars.”

The original celebrations were intended to be a day with parades, public meetings and a suspension of the business day starting at 11 a.m. Congress officially approved Nov. 11 as a legal holiday known as Armistice Day to be observed each year with an Act approved on May 13, 1938. In 1954, after Word War II saw the largest mobilization of armed forces in United States history, the act was amended by Congress at the request of multiple veterans’ organizations. Armistice Day was changed to Veterans Day via legislation approved on June 1, 1954, designating Nov. 11 a day to honor American Veterans of all wars.

Numbers keep rising but vaccine could be ‘game-changer’

With a continued rise in the number of new cases of the coronavirus, as well as record hospitalizations on Monday... read more