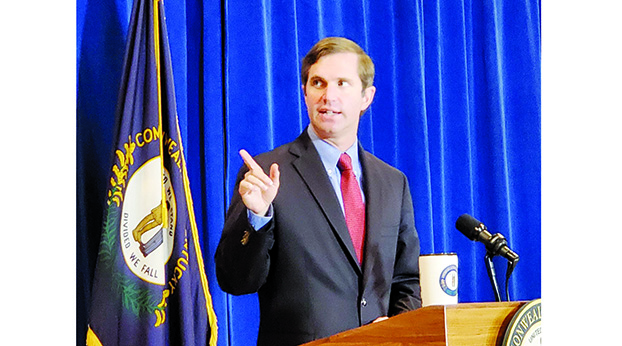 Gov. Andy Beshear is pleading with Kentuckians to wear a mask to fight the virus. - Photo by Tom Latek/Kentucky Today

Numbers keep rising but vaccine could be ‘game-changer’

With a continued rise in the number of new cases of the coronavirus, as well as record hospitalizations on Monday in Kentucky, Gov. Andy Beshear welcomed the news of the Pfizer vaccine test results.

“Early indications and analysis are that their vaccine pay be 90% effective against this virus,” he said during a virtual press briefing. “It is too early to take that to the bank, but folks, that, if it holds, is a game-changer and really good news. While our times are very dark right now, and we need a lot more out of everybody to get through, this is really seeing a potential light at the end of the tunnel.”

There were 1,745 new cases, the highest ever reported on a Monday. While it is usually a day of the week with fewer cases because of some labs are not open on Sunday, Beshear said this was the 11th–highest number of new cases in a day. Of those, 197 were children 18 and younger. That brings the pandemic total to 122,567, since the first case in Kentucky on March 6.

“We have so many cases now, there is no way they can contact trace all of them. There are just too many,” Beshear said. “For contact tracing to be really effective, we have to push our cases down. If you are positive and haven gotten a call from a contact tracer, sadly, it’s because there are that many positive people out there. So many, that it overwhelms every system that we create.”

There were 1,133 Kentuckians hospitalized on Monday, 300 in the ICU and 142 on a ventilator, all of which are the highest number in each category for the pandemic, according to Beshear.

“If you’re not wearing a mask, you’re putting yourself at a real risk for contracting COVID,” the governor warned. “This is happening everywhere, which means we can’t bring in health care workers from other places. If everywhere is surging, we’re going to end up on our own. That means if we get overrun and we don’t have enough staff in hospitals, it’s our friends, our neighbors, maybe even our family members who won’t get the treatment they need.”
State Public Health Commissioner Dr. Steven Stack concurred with the governor’s comments. “We are clearly at the worst place we have been for this disease,” he said. “It took us almost 15 weeks from the start of this pandemic in Kentucky just to get to the number of cases we had last week alone.”

There were also 11 more deaths reported Monday, making it 1,576 Kentuckians who have lost their lives due to the coronavirus.

For more information on the latest coronavirus figures and guidance and the Beshear Administration’s response, go to kycovid19.ky.gov.

Campaign aimed at helping adults to go to college

“Never Underestimate You” is the theme behind a new campaign Gov. Andy Beshear announced Monday for the Work Ready Kentucky... read more