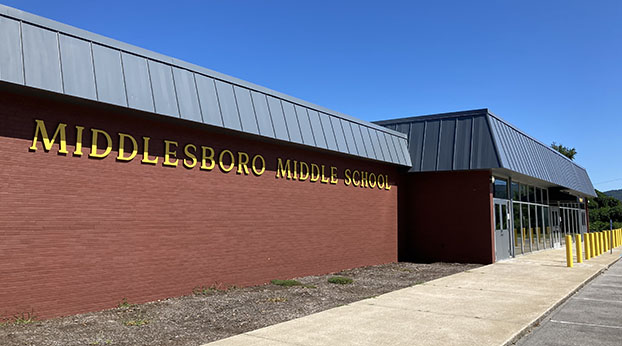 Students from the 21st Century Community Learning Center at Middlesboro Middle School hosted a “Lights On After School” event at the Middlesboro Nursing and Rehabilitation facility on Thursday, presenting cards for the residents.

Wright said the 21st Century Community Learning Center is funded for five years by a grant and provides participants the opportunity to learn things such as cooking, sewing, and other necessary skills after the regular school day is over.

“We’ll have the chamber of commerce come in and show the kids how to do plumbing and electrical work,” Wright said. “The fire department is going to sponsor a first aid and CPR class, so we can get them certified. We do a little bit of everything.”

Wright also shed some light on the nursing home event, saying it was a success.

The cards and letters were presented to a representative outside the facility during the Thursday night event.

Wright advised the Middlesboro City Council of the event during a recent council meeting, during which Middlesboro Mayor Rick Nelson signed a proclamation officially recognizing the event.

Nelson called Wright up to speak to the council.

“My kids and I sat down and talked about it,” Wright said. “They said they feel like those at nursing home don’t get thought of a lot, so we want to reach out to them.”

Nelson asked for a motion from the council to sign the proclamation.

The proclamation states in part:

A motion to accept the proclamation was made and approved by the council with no opposition.