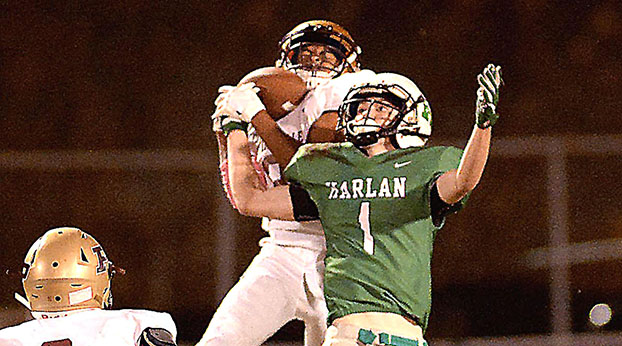 Pineville freshman defensive back Isaiah Morris went over Harlan's Evan Browning for one of five interceptions by the visiting Mountain Lions in their 29-8 win.

The second century of the Prineville-Harlan football rivalry began much like the first with Pineville going on the road for a victory. The Mountain Lions took advantage of Harlan mistakes in Friday’s 29-8 win, turning six turnovers into three touchdowns.

“Our defense played well,” Pineville coach Randy Frazier said. “We only had one defensive back who normally starts. We had two freshmen (Isaiah Morris and Clay Teague) in the game and they did extremely well. We have so many kids injured right now. We were on our fourth tailback tonight. We had to move some kids around.”

The Lions improved to 3-2 overall with the win and 2-1 in district action, clinching second place in District 8 of Class A and a home playoff game against Harlan on Nov. 13. Harlan fell to 3-2 overall and 1-1 in the district.

“They beat us up front. They are big and physical,” Harlan coach Perry said. “Most of the game, we didn’t have anyone over 200 pounds up front on the offensive side. I’m not faulting our effort at all. We flew around and hit people. We moved it a little the second half and saw some things we think we can use the second time around. We’ll see them again in a couple of weeks.”

Pineville marched 65 yards in nine plays in the opening drive, featuring a run and a reception by junior tailback Devin Morris, who aggravated an ankle injury and didn’t return. Senior fullback Trevor Kidd capped the drive with a 1-yard TD run with 8:31 left in the first quarter. Luke Naylor’s extra point gave the Lions a 7-0 lead.

The Lions had two interceptions in the first quarter and Harlan had one, but neither team could capitalize until Kidd recovered a Jayden Ward fumble on the third play of the second quarter. Senior quarterback Reece Capps went 19 yards for a touchdown on the next play. Naylor’s extra point pushed the lead to 14-0.

A long kickoff return by Darius Akal set up Harlan near midfield,  but Isaiah Morris picked off an Ethan Clem pass on the next play. Pineville drove 76 yards in seven plays, capped by an 8-yard run from Capps with 7:10 left in the half. Noah Caldwell, Kidd and Capps each picked up first downs in the march.

Harlan was held to negative yards rushing and no first downs until the final drive of the half when the Dragons picked up four first downs before Teague closed the half with an interception.

A Luke Akers interception, the fifth of the night for the Lions, set up the final Pineville scoring drive. Kidd rumbled 11 yards to cap the 10-play, 61-yard march. Landon King added the two-point conversion for a 29-0 lead with 8:07 left in the third quarter.

Triston Cochran picked up two first downs and Akal added one as Harlan answered with its only touchdown drive of the night, capped by Ward’s 1-yard run with 4:35 to play in the third quarter. Evan Browning added the two-point conversion.

The loss broke a three-game win streak for the Dragons, who were 1-10 a year ago.

“They made some plays. They have some nice athletes,” Perry said. “I still think we had more team speed than they had, but they are big and physical up front, and that’s where the game is won. We fought hard and didn’t quit. They are hurting right now. They thought we had a chance, but we came up short.”

“I have to give a shout out to coach Perry for taking a group of kids and helping them improve that much in one year,” Frazier said. “These guys are doing a great job with their program. I thought it was a great game.”

Harlan will play host to McCreary Central on Friday. The Dragons’ game scheduled against Leslie County was canceled due to high coronavirus numbers in Leslie. Pineville will be at home against Sayre on Friday.