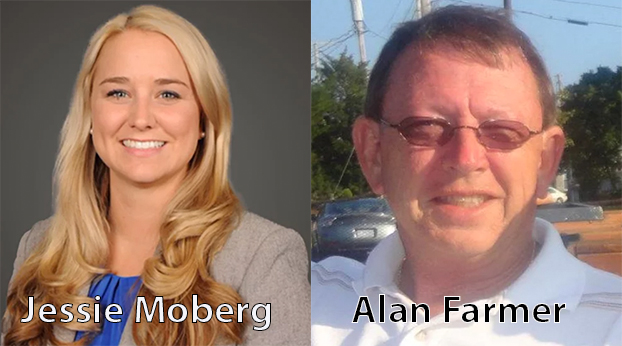 Council will present plaques of appreciation to those resigning

The Middlesboro City Council saw the resignation of two of its members during a meeting on Tuesday.

Mayor Rick Nelson advised the panel of the resignations.

“As you know, Jesse (Moberg) resigned to take a position as Assistant Commonwealth’s Attorney,” Nelson said. “We’ll miss her quite a bit, because she added a lot to the council.”

Nelson then advised the panel of another resignation, this one from Alan Farmer who has been a member of the council for approximately 10 years.

“Alan was the fire chief at one time, so he’s always been a big proponent for our fire and police departments,” Nelson said. “He decided to resign.”

“If you’ll let me, I’ll go ahead and do that and we’ll present that to them,” Nelson said. “Both of them have been good council members.”

The proclamation states in part:

“Whereas, Middlesboro, Kentucky, is a community which acknowledges that a special vibrancy exists within the entire community when its individual citizens collectively “go the extra mile” in personal effort, volunteerism, and service, and whereas Middlesboro, Kentucky, is a community which encourages its citizens to maximize their personal contribution to the community by giving of themselves wholeheartedly and with total effort, commitment, and conviction to their individual ambitions, family, friends, and community, I, do hereby proclaim November 1, 2020, to be Extra Mile Day. I, Mayor of Middlesboro, Kentucky, urge each individual in the community to take time on this day to not only “go the extra mile” in his or her own life, but to also acknowledge all those who are inspirational in their efforts and commitment to make their organizations, families, community, country, or world a better place.”

The council approved the proclamation with no objections.