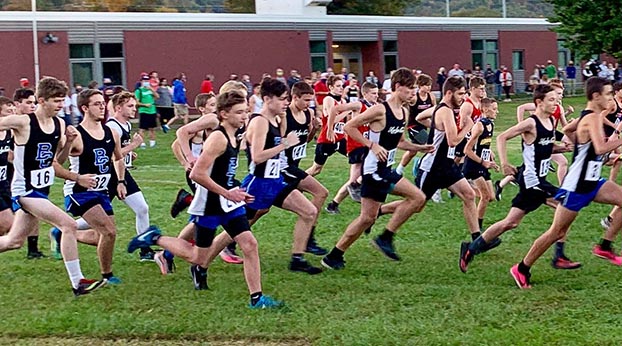 With the regional meet a little over a week away, Bell County coach Jason Stewart found plenty of positives from several record-breaking performances on Tuesday in the Middlesboro All-Comers Meet.

“I thought all of our kids ran hard tonight from elementary to varsity. I think almost every kid on our roster ran a PR tonight, so that’s very positive heading into the final weeks of the season,’ Stewart said.

Bell County’s Caden Miracle continued his breakout sophomore campaign as he finished first with a time of 15:53.59, edging out Corbin’s Sean Simons and Austin Terrell.

“Caden ran an amazing race tonight. Joining the sub-16 club for a 5K is an incredible feat in the running community,” Stewart said. “He’s worked hard ever since he ran elementary races years ago, and I suspect he’ll keep on working. He’s only a sophomore so we for sure have our sights set on him getting even faster.”

Nicholas Stewart was next for Bell as he placed 13th. Nathan Miracle placed 22nd, with Hayden Green placing 27th.

“This boys’ varsity team has really turned a corner. All of these guys are working so hard and it’s showing in the results,” Stewart said. “They are locked in and looking for a return to the state championship. Hopefully, they keep this thing going.”

Middlesboro’s Grace Rose won the girls’ race with a time of 20:07.22, just ahead of Corbin’s Nancy Jane Jackson and Williamsburg’s Nevaeh Warren.

Mallory James was next for Middlesboro in sixth and Katelyn Delk in 15th.

“It was a special night for Caleb and Peyton to break their own school records. That’s the first county boy to run 16s since the 90s, so that’s pretty significant,” Vitatoe said. “Now we turn our focus to region, and I like where we are. This group of boys and girls all really like each other and they support each other. They all are great teammates, and they listen well. They deserve to be successful at region, and I truly believe they will be.”

Ella Morton had another strong showing for Harlan as she placed 16th, breaking a school record in the process. Mia Pace was 43rd.