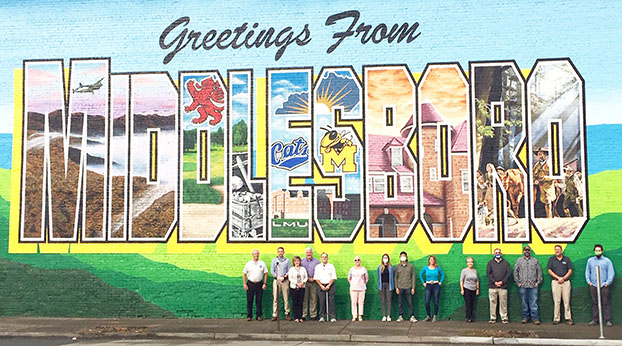 City officials, along with artists behind from Greetings Tour Murals, Victor Bing and Lisa Beggs, pose with the recently completed mural.

A mural that has been under construction on the wall of the Tamer building in downtown Middlesboro was presented to the public during a short ceremony on Monday. The event was attended by two of the artists responsible for the work, members of city government, folks from the Middlesboro Main Street Program, Bell County Tourism and many others.

“They were instrumental in putting this all together,” Grandey said. “They brought artists in from Louisville and had four other individuals here to help finish up some of the work, but Victor and Lisa are the ones that really made this happen.”

Grandey said the project has been in the works since 2014, with combined efforts from Middlesboro Main Street, Bell County Tourism, Middlesboro City Council, the mayor’s office, and others all contributing to the completion of the project.

“When we see the finished product, I think it’s just wonderful for the city,” said Middlesboro Mayor Rick Nelson. “This makes the whole downtown area and the whole city look good…I think it’s a winner.”

While largely the work of Greetings Tour Murals, there were additional artists involved in the creation of the work.

“Everywhere we go we try to collaborate a bit with locals,” Ving said.  “In this case, we had some of our friends from Louisville come and help.”

Beggs added that additional artists are part of a Louisville artists collective which operates under the moniker Often Seen Rarely Spoken.

Ving pointed out that the content of the mural came from Middlesboro residents.

“You guys are the locals, you know the city the best,” Ving explained. “We get the content, and then it’s like a puzzle, putting together what fits…the overall concept is consistent with the rest of our murals.”

Bing mentioned that while Middlesboro is the smallest city they have visited, it’s also been the largest wall on which they have worked.

“It’s been great hearing the history of the town,” Beggs said.  “Everyone stops by to tell us the story of how they grew up here and why they stay.  It’s been good to get to know people around town.”

“They’ve got murals all over the country,” Grace said. “This is one of the smaller towns they’ve done one in but it’s also the biggest mural, and they did a fantastic job…I just want to say thanks to all involved, it’s a beautiful addition to downtown.”