Brandon Baker and Dawson Woolum each topped the 100-yard rushing mark as Bell County scored on its first six possessions Friday in rolling to a 57-13 win over visiting McCreary Central.

Baker reached the end zone twice as he ran for 126 yards on nine carries. Woolum scored once while adding 105 yards on 10 rushes. Daniel Thomas, Cameron Burnett and Jonathon Beverly added one touchdown each on the ground.

“We’re still searching for our identity. I don’t know what kind of team we have. Without spring practice and scrimmage games, we’re still testing the waters,” Bell County coach Dudley Hilton said. “We are getting better blocking and running the ball.”

Burnett, the Bobcats’ junior quarterback, threw for 95 yards with touchdown passes to Baker and Jonathan Lankford. Woolum and Chandler Mink also had one catch each.

“You can’t be one dimensional. We have some kids open but we’re lacking a little experience in getting them the ball,” Hilton said. “I think if we get our passing down we’ll have a more rounded team instead of (being) one dimensional.”

Bell held McCreary to only 57 yards of rushing as Beverly and Hayden Dameron led the defense with nine and seven tackles, respectively. Lankford and Woolum each had one interception.

Burnett got the Bell offense off to a good start with a 33-yard TD pass to Langford on the third play of the game.

McCreary answered when Joey Abbott caught a pass from Ben Trammell for a 30-yard touchdown to tie the game at 7.

A Chandler Mink fumble recovery set up another Baker touchdown run, this one covering 27 yards.

Woolum broke free around the left side for a 40-yard touchdown run and a 35-7 lead after Dean’s fifth extra point.

Beverly went in from the 7 after a long punt return by Brant Hoskins. A Lankford interception helped stop a McCreary drive late in the half as Bell led 42-7 at the break.

Burnett and Baker teamed on a 52-yard touchdown play in the third quarter as the lead grew to 49-7 after Dean’s seventh extra point.

Thomas, a freshman, scored on a 6-yard run in the fourth quarter. Blake Evans added the two-point conversion for a 57-7 lead.

McCreary Central’s Kamari Giglio went in from the 5 in the final minute. 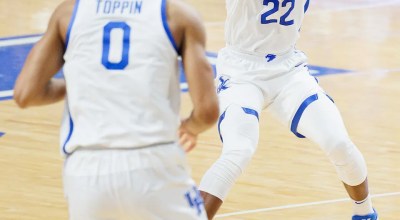