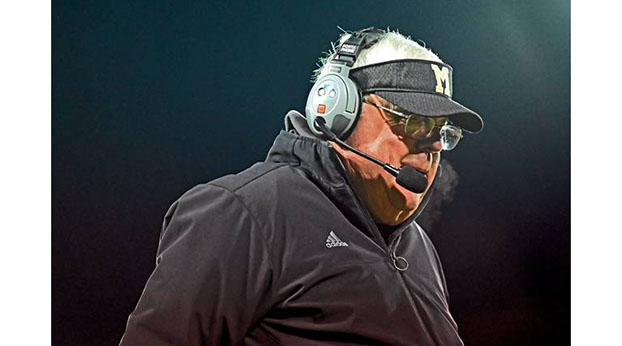 Middlesboro coach Larry French and his Yellow Jackets are ready to face Breathitt County next week.

With COVID cancellation, Middlesboro eager to face Breathitt next week

Late Monday night, Middlesboro was made aware that the game slated against Morgan County had been canceled due to Coronavirus concerns within the Morgan County football program. With that, Coach Larry French’s Yellow Jackets turned their attention to Breathitt County. Middlesboro will use the long week to prepare for the defending Class 2A District 7 champion Bobcats. Breathitt County ended Middlesboro’s 2019 campaign by a score of 50-15 on their way to the state semi-final. In addition to the current district alignment, there’s history between these two tradition-rich programs. Some instances include MHS opening its 1998 title season with a win at Breathitt County and a triple-overtime thriller in 2005.

“What we’re experiencing this season is something entirely different. Early on, you need to play games to get better. We’re using this time to get better at fundamentals and the things we do in order to win,” said coach Larry French. On reflecting against last week’s game at Pineville, he reiterated: “We left some points off the board. We have to cut mistakes.”

After graduating last year’s leading rusher, Breathitt County has continued its success on offense scoring an average of 55 points through their first two games.

In an interview on Thursday, Coach French and his staff made note of several Breathitt County playmakers and tough interior play on both offense and defense. The Bobcats are led on offense by quarterback Jaylen Turner (431 passing yards) and running backs Lane Weddle (156 rushing yards) and Caden Bowling (133 rushing yards).

Middlesboro will travel to Breathitt County in hopes of reversing last year’s fortune against the Bobcats. In Middlesboro’s 2-0 start, the Jackets have deployed a balanced rushing attack led by Caleb Bogonko’s 229 yards. Like Breathitt County, the Jackets have shown their potential on offense by outscoring its two opponents by a combined score of 79-20. The Jacket defense has proved tough through its start with five defenders each tallying double-digit tackles. Against both Harlan and Pineville, Middlesboro was able to control the line of scrimmage with hard-nosed play and sound tackling.

Using a long week of practice to their advantage, French’s Jackets will work to improve on finishing drives and eliminating mistakes.

“This early on, you want to play. We had no preseason – we jumped right in,” French finalized.

Despite being afforded the extra week of preparation, the Yellow Jacket football team is taking no time off while readying for their district opponent.

When Middlesboro and Breathitt County kick-off Friday in Jackson, it will be a chance for the Jackets to start 3-0 for the first time since the 2013 season.

By JOE ASHER joe.asher@middlesboronews.com The first weekend in October will see the arrival of the Dancing Bones Music Festival, an... read more