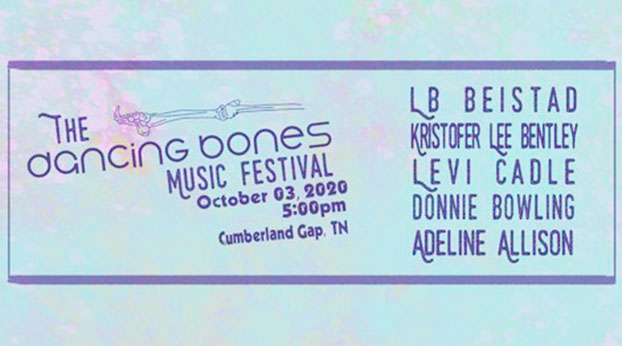 The first weekend in October will see the arrival of the Dancing Bones Music Festival, an evening of acoustic musical entertainment in Cumberland Gap, Tennessee.

Festival co-promoter Charlie Coleman went over a few details of the event.

“We decided to do something small down in the Gap, so we came up with the Dancing Bones Music Festival,” Coleman said. “We’ve got five acts, local and regional. A lot of them are award-winning musicians.”

Coleman explained the acts will be all acoustic, featuring musical styles such as newgrass, bluegrass, folk, modern and traditional country.

“There’s going to be a little bit for everybody,” Coleman said.

Beistad will be headlining the show, Coleman said.

Her website, lbbeistad.com, features a wide selection of original music to choose from.

“Lauren Beistad is a musician from East Tennessee who has garnered interest with her two new singles Dickinson, released 14 February 2020 and Honey’s Gone Bad, released 15 November 2019,” reads her website.

According to his website at https://kristoferbentley.com, Bentley is a Richmond, Kentucky-based singer-songwriter. Bentley’s music blends a mixture of rock, country, Americana, and folk.

“He writes from his heart, capable of pulling the strings of any music lover,” states Bentley’s website.

“Donnie Bowling is a prolific indie rock/folk-rock songwriter from the hills of Eastern Kentucky,” states his website, https://donniebowlingmusic.com. “Donnie writes about the things he feels are most important to express and share with others, therefore his lyrics usually have a stark honesty to them.”

A wide selection of live performance videos can be found on Cadle’s Facebook page, just go to Facebook and search for Levi Cadle Music.

Rounding out the festival’s schedule is Allison, who resides in Harlan County, Kentucky, according to Coleman.

Coleman said the hope is to put on two installments of the festival every year.

“We want it to grow,” he said. “We’d like to see our area back to how it used to be, back about 30 or 40 years ago this was a mecca for bluegrass and traditional country…we’re trying to bring that back.”

Coleman explained the festival is free to the public and will be a family-friendly event.

“We just wanted to give free music back to the area,” Coleman said.

Coleman mentioned attendees will be encouraged to observe safety measures designed to help slow the spread of COVID-19.

The Dancing Bones Music Festival kicks off in Cumberland Gab at 5 p.m. on Oct. 3.

By JOE ASHER joe.asher@middlesboronews.com   The Middlesboro City Council heard an update concerning the time frame for the approval of... read more