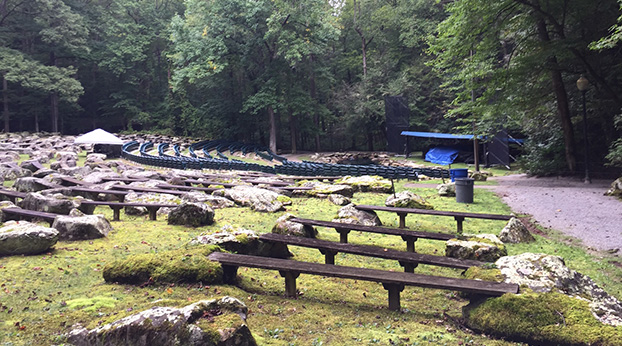 While the global pandemic has put a halt to most music events this year with one after another being canceled due to COVID-19, Bell County Tourism is finding ways to operate events in a safe manner, including a concert series taking place at the Laurel Cove Amphitheater. A pair of shows have already been successfully completed, with two more coming up in the next few weeks.

Bell County Tourism Director Jon Grace explained some of the details necessary for getting live music back up and running in Bell County.

“As most people know, there are a lot of events in Bell County that have been canceled, including our Laurel Cove Music Festival which was set to take place in June,” Grace said.  “We wanted to see if there was any possible way we could not go an entire year without having any live events.”

Grace added they also wanted to be prepared with a way forward should the current situation remain unchanged.

“After checking out the requirements that have been released by Gov. Beshear, we figured out we could have a show at the Laurel Cove Amphitheater,” Grace said.  “So, in partnership with the state park and Main Street Pineville…we were able to have some shows. We’ve had two so far and both have been sold out.”

Grace explained they are only able to accommodate about one-third capacity at the venue.

“We had amazing compliance at both shows,” Grace said. “It’s been great to see that everybody wore their mask and social distanced. You could tell people really appreciated the fact that it’s a lot harder to put a show on right now.”

Grace explained a safety plan specific to the venue had to be completed and put into place before the shows could move forward.

According to the Laurel Cove Music Festival Facebook page, several safeguards have been put into place to help folks stay safe while they enjoy live music in an outdoor amphitheater environment. These precautions include:

The first of the final two concerts in the series scheduled in the next few weeks is “Going to the Woods: DeeOhGee, Nicholas Jamerson and Eric Bolander,” on Oct. 10.

“The very next weekend, we have a southern rock group called the Steel Woods, who are fantastic,” Grace said.  “A local guy, Dalton Mills, is going to open the show.  We also have a group from around the Bristol, Virginia, area called 49 Winchester who are really good as well.”

The Steel Woods with 49 Winchester and Dalton Mills is slated for Oct. 17.

Grace gave a couple of pointers for folks wishing to attend the upcoming shows.

“To come to the shows, you have to wear a mask when you’re not in your seat and keep six feet away from people who are not in your group,” Grace said.  “The second thing is, I’d recommend getting your tickets beforehand. Both of our previous shows have sold out way in advance…these shows are already almost two-thirds of the way sold out.”

Ticket information can be found on the Bell County KY Tourism Facebook page.