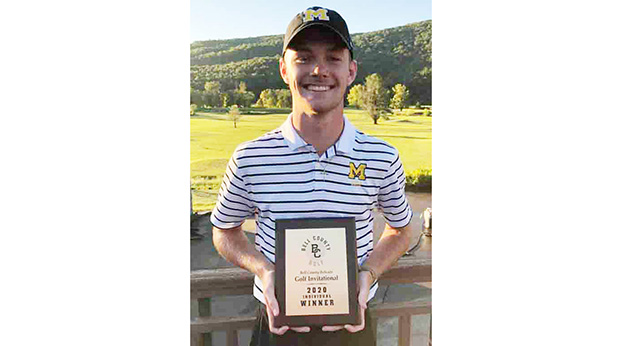 Middlesboro's Tyler Harris won the Bell County Invitational on Sunday with an even-par 72.

Middlesboro’s Tyler Harris shot an even-par 72 to claim a six-stroke win Sunday in the Bell County Invitational at the Wasioto Winds Golf Course.

Bell County’s Andrew Caldwell was second with a 78, and teammate Hayden Clark shot an 84. Knox Central Alex Smith shot an 86. Williamsburg’s Micah Steely rounded out the top five with an 87.

Middlesboro won the team title with a 378, three strokes ahead of Bell County.

Brayden Casolari, a seventh-grader, led Harlan County with a 93. Matt Lewis shot a 100, and Kobe Burkhart finished with a 125.

Nick Cox shot an 88 for Middlesboro, followed by Garrison Warren with a 105 and Warren Vaught with a 113.

William Miracle was third for Bell with a 104, followed by Bub Treece with a 115 and Gunnar Sams with a 129.

“Today was a very tough day of golf. The course played extremely tough. If you missed a fairway or a green you definitely had your work cut out for you. As you can see that Brayden and Matt both notched top 10 finishes while shooting 93 and 100,” Harlan County coach Greg Lewis said. “I can’t tell you how impressive Tyler’s win was tonight. To shoot an even-par 72 on this course today was as impressive a round as I’ve seen in a while. Tyler has been knocking on the door of that first big win for a while and he earned it today. I have no doubt he will be a force to reckon with next week in our conference championship and the following week at the regional tournament.

“Brayden drove the ball well and putted well but his iron play has been off a bit lately. And it doesn’t matter how well you chip and putt, if you keep missing greens at Wasioto it will catch up with you. Once he gets his ball-striking a bit more consistent he will really improve his scores. Matt actually struck the ball very well. Unusual for him, but he didn’t drive the ball very well today. And if you are consistently playing from the rough you will get some tough lies that are hard to play from. He actually played better than his score. He just had about four holes where he caught some of the worst lies you could imagine. And those lead to big numbers. Take those four holes away and he’s in the top five. Kobe had a bit of a rough day. Like I said before, if you are playing from the rough you are going to struggle. And he was a bit crooked off the tee, which put him in some hard positions to recover from. He hit some really good shots. He just put himself into some tough positions off the tee.”

Local teams return to action Tuesday and Wednesday in the Pine Mountain Golf Conference championship at the Wasioto Winds Golf Course. The Region 10 Tournament is set for Sept. 28 in Somerset.

Bell County knocks off Whitley for first win of season

Finding a way to replace the offensive firepower of quarterback London Stephney following graduation was the number one concern for... read more