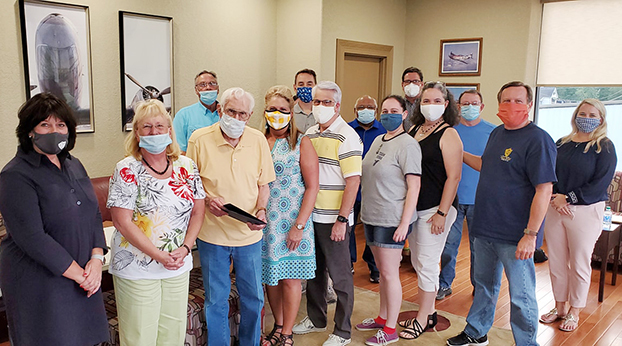 During a meeting on Tuesday, the Middlesboro City Council honored long-time resident Marcum Brogan, bestowing on him the title of Admiral of the Old Yellow Creek Navy.

“We are going to deviate from the agenda just a little bit,” Nelson said.  “If you remember, last year we honored Mr. Morrison for his work with the Lighted Cross out at East End.  We’ve kind of gotten away from that…We’ve decided to do that again this evening.”

Nelson called for Marcum Brogan to come before the council.

“Marcum, you may not know this, but we are going to honor you tonight for all your contributions to the city of Middlesboro,” Nelson said.

Nelson told Brogan he was being awarded the title of Admiral of the Old Yellow Creek Navy.

“It’s our highest honor,” Nelson said.  “I hope that we didn’t surprise you too much, but I can’t think of anybody who deserves it more.”

Nelson then asked a council member to read a short biography of Brogan.

Brogan is a class of 1952 Middlesboro High School graduate, United States Navy veteran, and a 1958 graduate of LMU. He worked for Commercial Bank, now known as Community Trust bank, for more than 33 years and retired as president. Brogan served as director of the Commercial Bank Board of Directors from 1977 to 1996. He now serves on the advisory board of the Bell County Market of the Community Trust Bank.

He has also served as president of the Rotary Club and Chamber of Commerce. Brogan remains active, working in his church, and currently works with Green Hills Funeral Home. He has been a member of the Yellow Creek Baptist Church for 58 years and serves there as a deacon.

“Thank you, a million times over,” Brogan told the council as they lined up for a picture.

Nelson thanked Brogan for his service to the community before moving on to other city business.