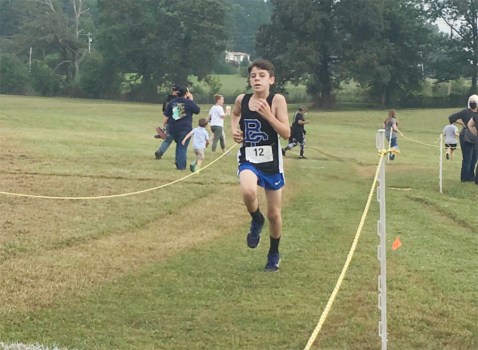 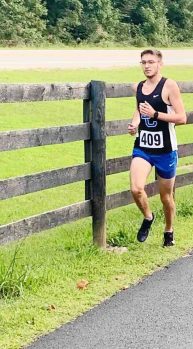 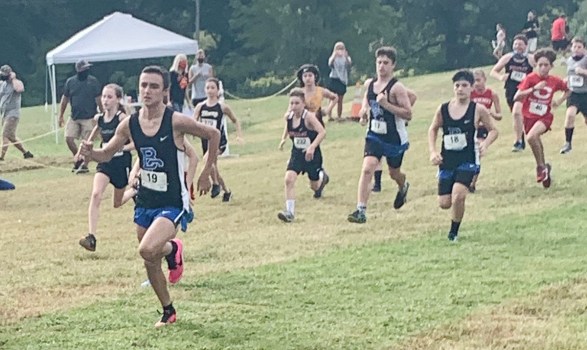 The Bell County boys’ varsity cross country team placed 4th overall as a team in the 5,000- meter run in a meet at Lynn Camp Saturday. Coach Jason Stewart said despite the heat, his team did well.

“The boys overall ran well today. It was hot out there. Hopefully, after we get a race or two in, the rust from no track season in the Spring will really start to come off,” Stewart said.

The girls’ JV team also fared well in the 5,000-meter run, with Sophy Jones and Kaylin Hickey each placing in the top 10.

“These girls really worked hard today,” Stewart said. “Got out and raced hard early, ended up with some strong places.”

On the boys’ middle school squad, Bell athletes claimed five of the top nine finishing spots in the 3,000-meter run, taking first place as a team.  Stewart said his boys raced hard from start to finish.

“I’m really proud of these elementary boys, they raced hard today,” Stewart said. “Jacob stepped up and got his first invitational win, and I couldn’t be more proud! These guys know how to work.”

Three days after a fourth-place finish at Lynn Camp, the Bell County Bobcats found the right formula Tuesday in the Harlan County All-Comers Meet by claiming three of the top four spots to win the team title with 39 points.

Caden Miracle, a sophomore, was the individual winner with a time of 17:51.97. Nicholas Stewart, a seventh-grader, was third at 19:42.94, followed by senior Jacob Robbins in fourth at 19:43.24. James Arno, Hayden Green, and Isaac Lefevers took the 13th, 14th, and 15th spots, respectively. Lucas Miracle rounded out the top 20.

“I was very pleased with how my guys ran today,” Bell County coach Jason Stewart said. “Caden came out hard and set the pace early cruising to a victory. I thought Nickel and Jacob really stepped up and had big races, finishing third and fourth. All of the guys brought it. It’s still a long time until region though, so they have to stay focused and keep improving week to week.”

“I thought the boys were good, but we didn’t match Bell’s intensity and that was the difference,” Vitatoe said. “I think they all ran well, and it was a good step in the right direction despite not coming away with a win. I tip my cap to Bell. They were fired up and ready. It’s a challenge right now finding the right balance for training with being so far behind. We are going to keep working, stay positive, and focus on lifting each other up. That will be key to progressing toward our goals for October.”

Middlesboro was third in the team standings with 67, led by Ozzy Norris and Brendan Delph in ninth and 10th, respectively. Trevor Raney was 23rd, Drew Martin was 24th and Caleb Brock was 29th.

After a breakout season as a seventh-grader last year, Harlan County’s Peyton Lunsford won’t catch anyone by surprise this fall. That’s one reason why not many were surprised when Lunsford crossed the finish line first Tuesday in the Harlan County All-Comers Meet with a time of 23:07.97.

“Peyton ran a great race today. We had a strategy coming in and she ran it to perfection, which speaks a lot to her growth as a runner in the last year,” Harlan County coach Ryan Vitatoe said.

Middlesboro won the team competition with 25 points, placing four in the top eight. Harlan County was second with 52 points, followed by Lynn Camp with 63 points and Letcher Central with 81.

“I am blessed to coach great kids. Our boys and girls teams both ran well tonight,” Middlesboro coach Luke Gilly said. “Our conditioning is improving and I’m always impressed with their competitiveness and grit during a race.”

Mallory James, of Middlesboro, was second with a time of 23:43.03. Teammate Grace Rose was third at 23:59.88. Katelyn Delk and Kennadi Larew were seventh and eighth, respectively Kirsten Keith and Hannah Fleet were 12th and 13th, respectively. Kamryn Keith was 29th.

“I thought the girls ran well overall despite being without Leah (Taulbee) and Riley (Key),” Vitatoe said. “They battled the entire race. Middlesboro is a great team.”

“In this being our first showing of the year, we looked forward to setting the first block in the foundation of a strange season,” Letcher Central coach Winston Lee said “ In reflecting, it was a solid start given our circumstances. The plan is to now continue to build up as we hope to develop a more consistent routine and schedule. See a lot of potential in younger athletes that have joined the program this fall. I’m looking forward to a great season and truly appreciate HC’s willingness to host.”