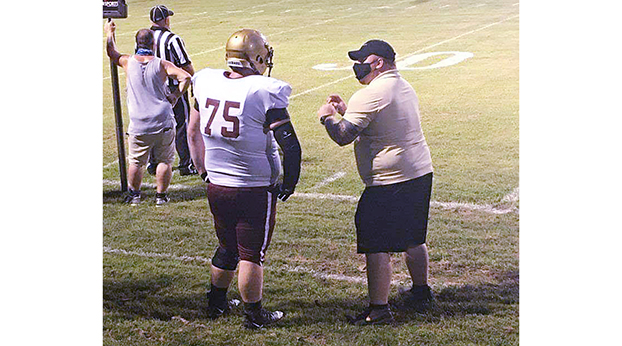 The Pineville Mountain Lions gained their first win of the season Friday night against the East Ridge Warriors with the final score of 48-24.

In the victory over East Ridge, the Mountain Lions were led by junior Scooby Morris with plenty of rushing yards and four touchdowns. Also contributing were Juniors Noah Caldwell and Landon King each with a rushing touchdown.

Last season, coach Randy Frazier led his team to an 8-3 overall record in his inaugural season as head coach. This season brought with it the loss of 11 seniors. However, the team returned with eight seniors this year, many at important positions. Frazier was excited to see this group step up and lead their team to victory with many more in their sights.

This is a big win because this season has brought with it additional challenges. With football season only being in for three weeks now, teams and fans are readjusting to the many safety precautions being taken.

“It’s difficult having to think about things on the field that you wouldn’t normally think about,” said Frazier. “It’s tough having three weeks of practice before your first game of the season and being on the road. We have many pregame distractions like taking temperatures at the locker room and making sure everyone is separated and distanced on the sidelines.”

Despite these challenges, the Mountain Lions came out big, and as Fraiser noted,  “A win’s a win. We’ve got a good group of kids and seniors that I believe can win district this year. More teams have dropped out of playing this year and we have more road games this season, but I think there are more tests to get us ready and prepared for district.”

With the victory, the Mountain Lions start off strong at 1-0 on the season. They will take on cross-town rival, the Middlesboro Yellow Jackets (1-0) on Friday night at home which is the Laurel Bowl and senior night.

“Rivalry is tough. Last season we had a good game against them and couldn’t finish. We’ve just got to play strong all four quarters and finish. Middlesboro will help us get prepared for the district from going to a 2A school to a 3A school,” Frazier said.