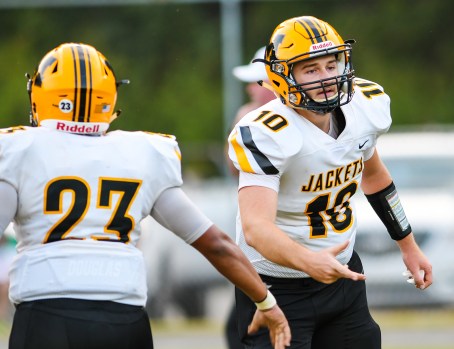 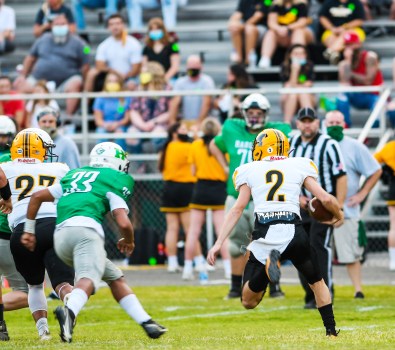 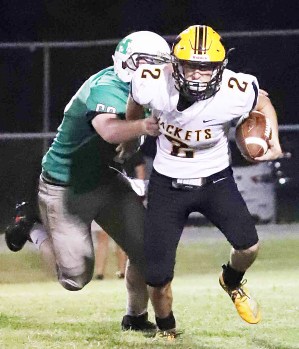 Middlesboro freshman quarterback Cayden Grigsby battled to break away from a Harlan defender in the season opener. (Kim Henson photo)

Getting better isn’t easy when you lose your best player, but Harlan coach Eric Perry is convinced the 2020 Middlesboro Yellow Jackets are better than the 2019 version that finished 8-4.

Perry was impressed with the Jackets’ balance on Friday in a 44-0 rout of Harlan in the season opener for both teams. Middlesboro no longer has Jabari Kyle, who carried the Jackets’ offense a year ago, but there was no shortage of heroes in the win.

“They are 10 times better than last year,” Perry said. “They had Jabari last year and he just made plays.”

Senior running back Caleb Bogonko ran for 151 yards and scored three touchdowns in only seven carries as he took over as the Jackets’ primary ball carrier.

“He has talent. We just have to get him in shape,” Middlesboro coach Larry French said. “He did a good job tonight and ran the ball hard. It was a good opening win for us, but we have a lot of work to do. We have to develop some depth.”

The Middlesboro defense was also solid, especially up front where senior nose guard Jacob Heck (6-2, 334), junior tackle Jalil Patterson-Graves (6-0, 291) and junior end Jay West (6-4, 220) dominated the line of scrimmage while holding the Green Dragons to only 66 yards rushing on 36 carries.

“Jalil and Jacob are two big kids in the middle who move real well and are strong. They controlled the middle,” French said. “When Jay Tyler does things right, he’s pretty good also. I also thought we had some others who played well on that side.”

“They have some very good defensive linemen,” Perry said. “We knew coming in we were very limited up front, and we just have to go back to work tomorrow.”

Harlan lost senior center Isiah Hall, the only returning starter on the offensive front, to an injury early in the game.

“We’re very limited up front and we had a couple get hurt tonight,” Perry said. “We threw a freshman, Trent Childers, in there and he held his own at 170 pounds. He’s a tough kid.”

The Dragons also hurt themselves with two fumbles and two bad snaps on punts that gave Middlesboro the ball deep in Harlan territory.

“That’s not something we’ve had issues with in the past,” Perry said. “We’ll have to look at it. We were having trouble snapping the ball. We were short every time. I don’t know if it was fatigue or what. That one threw me for a loop.”

French worked with both senior Eric Helton and freshman Cayden Grigsby at quarterback, alternating them throughout the game.

Bogonko needed only one play to put the Jackets on the board as he took a pitch from Helton and raced 65 yards around right end for a touchdown, dodging Darius Akal inside the 10 as he cut back inside. Helton went in for the two-point conversion and an 8-0 lead only 15 seconds into the game.

West recovered a Connor Scearse fumble two plays into Harlan’s first possession. A 21-yard run by Riley Gent set up a 2-yard touchdown run by Bogonko with 8:45 left in the opening quarter. Grigsby went in for the two-point conversion and a 16-0 lead.

Middlesboro drove 78 yards in seven plays in the second quarter to score again. Bogonko had runs of 16 and 38 yards before Grigsby went in from the 2 with 5:53 left in the half. Grigsby’s two-point conversion pushed the lead to 24-0.

Craig Brock set up the Jackets’ fourth touchdown when he recovered a fumble on the Harlan 37 with 5:37 to play in the half. Gent went 19 yards for a touchdown. Helton was stopped by Jeremiah Mills on the two-point attempt but the Jackets led 30-0 at halftime.

Another bad snap on a punt attempt gave Middlesboro the ball on the Dragons’ 21 after Scearse was dropped for an 8-yard loss. Bogonko scored on the next play, then aded the two-point conversion to start a running clock with 5:08 left in the third quarter.

Tyler Kelly closed the scoring with an 11-yard run with 8:09 left five plays after Triston Cochran was stopped on a fake punt try at the Harlan 25.