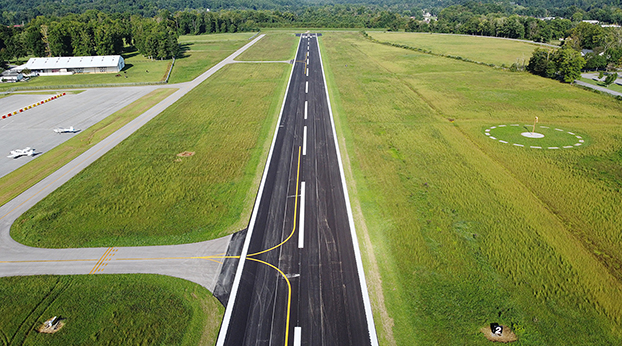 Glynna Brown will tell you that corporate America doesn’t come to town on a bus. In fact, that slogan is even on her business cards.

Brown is chairman of the Middlesboro Bell County Airport Board. She said the airport just re-opened a week ago after having a very important project completed that will benefit local air traffic, including many business flights coming to town.

For 21 days, the airport was shut down while the runway was repaved. Money from state grants funded the nearly $1 million project, according to Brown.

“The project we’ve just completed is the runway paving. A couple of years ago we did the taxiway paving. This was a very needed project for our runway. It was deteriorating a little bit and then they decided we might as well go ahead and do some preventative stuff that we needed,” she explained.

Brown said other area airports also received funding for repairs and upgrades, including Harlan, which also had some resurfacing work done, and London, which she said had major resurfacing that shut the airport down for three months.

The local airport has had repairs and runway patching done over the years, but Brown said this is the first time it has been repaved in the past 20 or 30 years to her knowledge. The repaving of the 3,640-foot-long runway was done by Hinkle Contracting Corporation of Middlesboro.

The airport has 40 planes based on the grounds, and of the 30 hangers, all but two are full, Brown said. She added that 30 businesses use the airport on an at least semi-regular basis, and corporate planes bring executives to town from several companies that have locations in Bell County. There are even some physicians who fly in from neighboring states a few days each week to practice in the county.

Bell County Judge-Executive Albey Brock said the improvements to the airport are important for the community, as are those who serve on the airport’s board of directors.

“It’s great to see the airport continue to be upgraded and improved,” Brock said. “I appreciate those serving on the airport board and all of the work they do to help the airport and the entire community.”

Air travel is not new to Bell County. Brown said the first flight into Middlesboro was in 1912, and she said the 100th anniversary of the milestone was celebrated by the airport in 2012, although there was no official airport here at the time. That didn’t happen until the 1940s, when it became a multi-use airport.

Since that first flight, things have come a long way for aviation locally. Today, the airport is home to several types of aircraft, including ultralights, single-engine, and twin-engine planes. It also sees traffic from the state police, the national park, and other agencies bringing their aircraft to town on occasion. The airport even has its own mechanic and instructor on the field, and “that really makes a big difference,” according to Brown.

“A few years ago we had some governors that said this, an airport, is the first face a business person sees, so you don’t want a facility that’s not up to par,” she said. “We used to have just a little 20’ x 40’ building out there in the front yard, and now we’ve got this. It’s taken a long time, but we’ve got it,” she said.

What they have is a state-of-the-art airport, and what Brown called one of the nicest airports in Kentucky. She said the facility, which was just completed about a year ago, features an area where people traveling through Bell County can refuel their planes, as well as go inside the airport to see some historical displays inside the terminal, grab a soft drink or snack, and even relax and get some sleep if needed. The new, updated airport has more than 12,000 square feet of space inside the main building.

Although there are restrictions on where people can go, Brown said the public is encouraged to come to the airport to look around and visit to see what a great facility is located in Bell County.

A Q&A with Sen. Mitch McConnell and Amy McGrath

BY OLIVIA MOHR olivia.mohr@bluegrassnewsmedia.com   With the general election approaching, it’s important to know where candidates stand on the issues.... read more