Run defense will be key for Kentucky 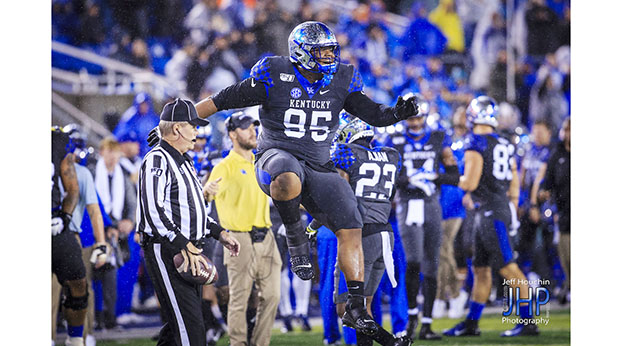 Quinton Bohana will be a key member of the UK run defense this season. (Jeff Houchens photo)

How often can you remember when Kentucky’s biggest weakness in Southeastern Conference play was that it could just not stop a power running attack?

Numerous SEC offenses would literally overpower UK’s defense at the line of scrimmage to gain yards and control the clock. Sometimes Kentucky’s first unit could hold up on the defensive front but quality depth was non-existent most years.

That’s going to change this year.

Defensive coordinator Brad White says he will “play as many as we need to play” on the defensive front. However, the number of quality players he thinks he has is way more than any Kentucky team may ever have had.

“You can’t always have everybody available, but I would like to think we could go and play essentially three deep where we have have nine guys across the front,” White said. “If we can play seven or eight (players) significant snaps we can stay fresh out there and go full speed and not hold something in the tank.”

White understands it’s only human nature for any player to know he cannot use all his energy on the first three plays of a drive if he’s doing to have to stay on the field.

“If you have got depth you can play hair on fire three or four reps, put in somebody and they do the same and then I come back in,” White said. “We are still trying to build depth but I really love the effort.

“(Defensive line) Coach (Anwar) Stewart has been unbelievable with those guys. The energy he brings, it shows. It rubs off on them and it is fun to be part of that out there.”

Part of the reason White likes the quality and quantity of defensive linemen he has is the addition of freshmen Justin Rogers, Octavious Oxendine, Josaih Hayes and Tre’vonn Rybka.

“When the four of them all walk you, you’re like, ‘Wow. That doesn’t look like a true freshman class.’ They have really good girth to them, good size. Big people are still big in the fourth quarter and that’s sort of our mantra,” White said.

“But like anything, when you walk in and you’re a true freshman, there’s a learning curve. You’re not just the biggest one anymore. There’s a lot of big bodies out there. We’re lucky enough to go against one of the best O-lines in the country every single day, so it makes us better up front. The competition is great.  I think there was a lot of thinking early so there was some negative push up front, pushing our line of scrimmage back, but now they’re just starting to play and they’re looking like the players we recruited.”

One spot UK certainly has more overall talent than ever before is nose guard. Coaches believe Quinton Bohanna could be the best in the SEC. Backup Marquan McCall is considered a rising star. Then there is Hayes, a four-star standout who surprised many when he picked UK.

“He’s a big, strong, rugged individual. He’s got big, strong hands,” White said. “The thing for him is he just has to continue to learn our playbook. He has to understand where he has to go all the time and how that affects the entire defense.”

Bohanna says all the freshmen defensive linemen all have impressed him with their willingness to learn but one has stood out — Oxendine. He was the top-rated defensive lineman in Kentucky last year and picked the Cats over Tennessee.

“Oxendine is putting a lot of effort in off the field studying the playbook and asking questions,” Bohanna said. “He’s been standing out on and off the field. He is making a lot of plays so far.”