Child found in vehicle as three arrested on drug, other charges 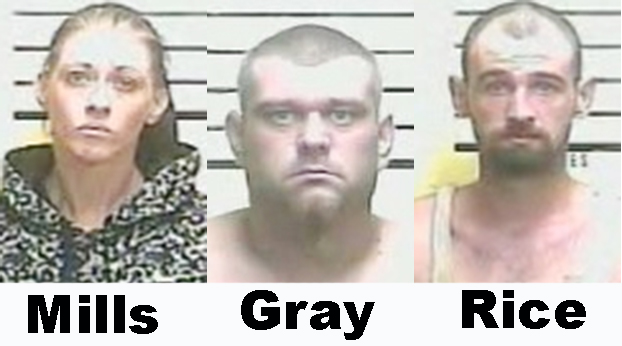 Routine patrol for Bell County Sheriff’s K-9 Deputy Adam Southern led to the discovery of a woman and child in a vehicle in the Cannon Creek area Sunday night shortly before midnight.

Southern came upon a white Chevy Aveo and found a woman who was reportedly slumped over in her seat. A small child was in the back seat of the vehicle playing on a phone.

Southern had to yell and beat on the window to wake the woman, who was identified as 32-year-old Sabrina Mills of Flat Lick. When he spoke with her, Southern reported that Mills had slurred speech and appeared under the influence. She was then asked to exit the vehicle and was unsteady on her feet, using the car to keep her balance.

Mills was taken into custody. When asked if she was alone, she said no, and told Southern that there were two men with her, but they had gone off into the woods to set up a tent. Southern walked through the woods approximately 300 yards and found Earl Gray, 35, of Artemus, and Benjamin Rice, 25, of Flat Lick. Both were determined to be under the influence of what is believed to be methamphetamine, and they were also taken into custody.

The child was alert and awake, but in close proximity to knives and drugs. Due to all three individuals being intoxicated, Child Protective Services was called and will be conducting their own investigation. CPS contacted a grandparent who took possession of the child.

All three individuals were lodged in the Bell County Detention Center. Mills was charged with

possession of a controlled substance – 1 degree, 1st offense (methamphetamine), possession of marijuana, wanton endangerment – 1st degree, buying/possessing drug paraphernalia, and public intoxication. During the booking process she was also found to be in possession of drugs and was charged with promoting contraband – 1st degree.

Also assisting on the scene were Deputy Nathaniel Price and Chaplain Allen Sanders.