Vaught expects Cats to have successful season on the gridiron 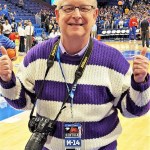 Jamie H. Vaught is a longtime sports columnist in Kentucky.

Over two months ago, I predicted the football Wildcats would have a nice team. I wrote that Coach Mark Stoops’ UK team, with several preseason All-Americans, would be respectable, finishing with a 7-5 mark in a 12-game schedule and the Cats would be making their fifth straight bowl trip. Not bad but could be better.

Well, as you know, COVID-19 pandemic has forced college football to cancel games or make scheduling changes.  For Kentucky and the SEC, it means a new 10-game conference slate, instead of eight league matchups and four non-league games.

The first weekend set of SEC games in a revised schedule will take place on the last Saturday of September. And here’s my new fearless forecast for the 2020 Wildcats, who are coming off a remarkable 8-5 Belk Bowl-winning campaign in 2019.

AUBURN (Sept. 26, Auburn) – Kentucky has not played against the Tigers since 2015 when it lost 30-27 at home. Now entering his eighth season at Auburn, Coach Gus Malzahn is expected to have a Top 15 team this time. The Tigers have sophomore QB Bo Nix back after an outstanding rookie year when he captured the SEC Freshman of the Year honors. As you may remember, Auburn also defeated Alabama 48-45 in a memorable Iron Bowl showdown last fall. The season opener will be seen on SEC Network, beginning at 12 noon (ET). Auburn by 6

OLE MISS (Oct. 3, Lexington) – New coach Lane Kiffin’s Rebels, who kick off their season against the Gators (ESPN, 12 noon) in Oxford, are coming off a 4-8 year under Matt Luke, who was fired. (Luke, by the way, is now the associate head coach at Georgia.)  While Mississippi may struggle, the Rebels could be fun to watch with their high-scoring offense. The 4 p.m. matchup is televised by the SEC Network. UK by 7.

MISSISSIPPI STATE (Oct. 10, Lexington) – This should be an entertaining matchup as new MSU boss and offensive genius Mike Leach returns to SEC for the first time since his early UK days as offensive coordinator during the late 1990s. His probable 6-foot-5 QB is K.J. Costello, a graduate transfer from Stanford who will run the Air Raid offense. UK by 6.

TENNESSEE (Oct. 17, Knoxville) – Jeremy Pruitt, now in his third year in Knoxville, has done a nice job with the improving Vols, who edged Kentucky 17-13 last season. Pruitt is the former defensive coordinator at Alabama, Georgia and Florida State. UT, coming off an 8-5 Gator Bowl season, is expected to be better this time. It is possible that Tennessee, after playing at highly-talented Georgia, could be hurting when meeting UK? Also, the Vols could be looking ahead to the Alabama contest on Oct. 24. I don’t think so. UT by 3, dropping Kentucky’s record to 2-2.

GEORGIA (Oct. 24, Lexington) – Kirby Smart’s teams at Georgia have been very dangerous lately and this season will be no exception. The Bulldogs might’ve been more dominating with its new QB by the name of Jamie Newman, a graduate transfer from Wake Forest, but he since has opted out this season due to COVID concerns. They also have a new offensive coordinator by the name of Todd Monken, who preaches Air Raid offense, from the NFL. The Bulldogs could have a letdown against the Cats if they stop Alabama on the road in the previous weekend. UGA by 10.

MISSOURI (Oct. 31, Columbia) – The Tigers have a new coach. His name is Eliah Drinkwitz, who came to Missouri after only one season at Appalachian State where he guided the Mountaineers to an outstanding 13-1 record. Missouri will be in a rebuilding mode. UK by 6.

VANDERBILT (Nov. 14, Lexington) – Coach Derek Mason, now in his seventh season at Nashville, is on the hot seat to produce his first winning campaign at Vandy. The Wildcats stopped the Commodores 38-14 last fall in Music City. UK by 7.

ALABAMA (Nov. 21, Tuscaloosa) – Nick Saban’s Crimson Tide will have their hands full in mid-November. Before facing the Cats, Alabama plays at LSU on Nov. 14. After UK, Tide has Auburn in a heated rivalry showdown during the Thanksgiving weekend. That could be good news for Kentucky. Alabama by 12, though, after a close first-half battle.

FLORIDA (Nov. 28, Gainesville) – Coach Dan Mullen is beginning his third year at the Gator helm and is doing very well. Just like his Mississippi State days. His Gators, who defeated Kentucky 29-21 at Kroger Field last year, are a Top 10 powerhouse again after finishing with an 11-2 mark, including an Orange Bowl victory over Virginia, in 2019. Florida by 9.

SOUTH CAROLINA (Dec. 5, Lexington) – Coach Will Muschamp’s Gamecocks are coming off a very disappointing 4-8 campaign in 2019 after a critical injury to QB Jake Bentley, who later moved to Utah as a graduate transfer. USC hopes its offense will improve after hiring new offensive coordinator Mike Bobo, the ex-head coach at Colorado State. Bobo, as you may remember, is a former QB and assistant coach at Georgia. UK dropped to the Gamecocks 24-7 in Columbia last fall. UK by 7, completing a bizarre COVID-19 campaign with a 5-5 mark, which isn’t too shabby in SEC battles.

But I’m still hopeful the Wildcats can do better and perhaps finish with two more SEC wins to make it 7-3 in a very tough conference race. And, needless to say, that would be awesome.