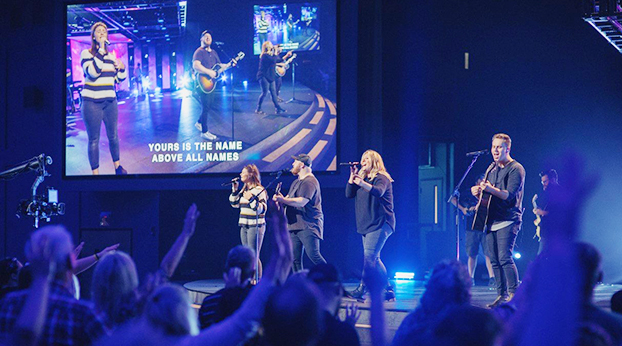 Long Hollow staff see changes that track with larger changes in culture and life as necessary for faithful stewardship of the ministry God has given them.

Every church has adjusted some aspects of ministry since the onset of the COVID-19 global pandemic. But even as the effects of COVID-19 continue to press into the modern landscape of the evangelical church, some congregations are already turning from the question of how to shift from the current moment toward changes for the long-term future.

Robby Gallaty, pastor of Long Hollow Baptist Church in Hendersonville, Tenn., said he views the impact of COVID-19 on ministry not as an interruption, but instead as a disruption to the way things have typically been done in the local church.

Long Hollow staff see changes that track with larger changes in culture and life as necessary for faithful stewardship of the ministry God has given them. The most immediate, tangible change, according to Gallaty – and this is something he doesn’t anticipate turning around anytime soon – is attendance at church gatherings.

The shift is not unique to Long Hollow. Some expect decreased in-person attendance to be permanent.

In recognition of the new reality, Long Hollow has begun the process of creating an intentional, permanent online church ministry – which includes hiring an online-specific pastor, finding ways to facilitate membership remotely, as well as conducting the ordinances and small groups in cities hours or even states away.

“The churches that are predominantly dependent upon a building are going to have a hard time transitioning into the future,” Gallaty said. “People say, ‘I just want to go back to the way things were before COVID,’ but I really don’t think that we will ever get back to that, particularly in the area of numbers … as far as in-person attendance anytime soon.”

The online approach for Long Hollow is not just a livestream of the in-person worship gathering, according Collin Wood, operations pastor at Long Hollow. Instead, in a general sense, it functions as its own “campus.” Wood said individuals and small groups of people are participating online from multiple cities as close as Chattanooga, Tenn., and as far as Portland, Ore.

Attempting to minister equally to those participating online as well as those who come in-person to the church’s physical campuses in Hendersonville or Gallatin, Tenn., is vital, Gallaty said, calling it a “both/and” approach.

“That’s the future of our church and if we say, ‘No, we’re not going to reach them online, they’re just going to have to come for in-person only,’ then I think we’re going to miss where people are,” Gallaty said.

Long Hollow’s philosophy of ministry has not changed, Wood added.

“Pastors and church staff are called to equip the people of God to do ministry … and with a church the size of Long Hollow it would be impossible for church staff to do all the ministry and care anyways,” he said. “It has to be done by our people and so that’s why life groups and discipleship groups are so important.”

The emphasis of the church will still be local, with small groups forming in each city where there are Long Hollow members. Those local leaders, equipped by the church staff, will be tasked with ministering to members in every context Long Hollow reaches – likely far beyond Hendersonville.

Transitioning to a greater online emphasis is a reality among smaller churches as well. Tony Watson, pastor of First Baptist Church in Palestine, Texas, said the church’s livestream efforts have increased significantly during the pandemic.

The congregation of approximately 225 members now runs 180 in person, with the remainder primarily online. In order to reach more people, the church expanded its streaming to platforms other than Facebook and began using higher-quality production equipment.

Predominantly online giving is here to stay as well, according to Katelyn Western, active serve team member of Fellowship Baptist Church in Joplin, Mo. Western said with the shift online, giving has increased, putting them ahead of budget for the year.

“I see it being the future of our churches as technology ever increases and changes the way we live,” she said.

While answers for how to move forward in the middle of intense cultural changes are not always clear, Long Hollow’s Wood encouraged church leaders and members to start with what is in front of them, trusting God to take the ministry of the church forward.

Gallaty also noted that Long Hollow staff has made an effort to be a resource to other churches looking to deepen their online campus approach. He said it’s a way to steward where God has led them thus far in church organization and modern ministry approach.

“You’ve got to give people options,” Gallaty said. “The way people learn about church today is through social media and online communities. If we don’t have a robust presence online … then we are missing front door access that people have to get into our church.”

Change is constant, Gallaty said. But as the body of Christ, there must be a willingness to do what it takes to reach as many people as possible even if it’s uncomfortable and different.