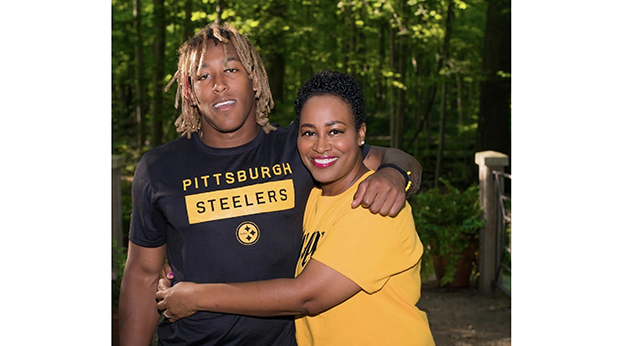 April Snell says her son, Benny Snell, always has goals and does this year at Pittsburgh but he does not share them publicly.

Former Kentucky running back Benny Snell “loves” life with the Pittsburgh Steelers according to his mother, April.

“It is beautiful there. Hilly, great bridges. It’s like being in a big city. Where we live (Columbus, Ohio) is not really city-like. In Pittsburgh, it is a faster pace but the people are very nice,” April Snell said. “No complaints from us.”

Snell, the Steelers 2019 fourth-round draft pick out of Kentucky, was second on the team in rushing yards with 426 yards last season when he played in 13 games with two starts. He reported back to preseason camp this year at 212 pounds, a drop of 12 pounds from last season to help improve his speed and lateral quickness.

His mother said she wasn’t positive why the Steelers wanted him to drop weight.

“I don’t get to ask as many questions as you might think about the plans the team has for him,” April Snell laughed and said. “When he was home he was very active. It’s big business to get into shape. He was also working out multiple times per day and really taking it seriously. You can see he made a transformation with his body. They wanted to see him a little bit leaner and he did it.”

“He always has goals. He just doesn’t share them,” his mother said. “It’s not so much yardage like it used to be. He has broader goals now. I can ask him but he doesn’t really tell me anything. I just find out when everybody else does.”

Bohanna one of best interior linemen in SEC