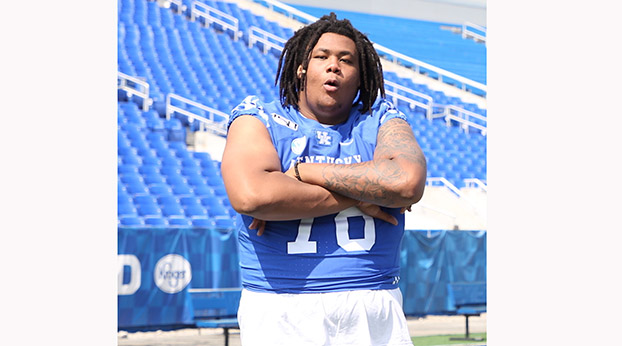 Nick Lewis is one of the UK offensive linemen who dropped significant weight during the COVID-19 quarantine time. (Vicky Graff Photo)

UK’s offensive line one of best in SEC this season

Kentucky’s offensive line is being projected as one of the best in the Southeastern Conference this season. The unit has experience — center Drake Jackson, guard Luke Fortner and tackles Landon Young and Darian Kinnard started every game last year — and talent.

But it also has one more thing — discipline.

Despite not being able to work out at UK’s facilities during the pandemic, the offensive linemen apparently rested the temptation to slack off and possibly gain bad weight. Even Kentucky coach Mark Stoops admits he was surprised when the team was able to start working out again and he saw his offensive linemen.

“I was really surprised to see how many guys took care of themselves. Take a guy like Nick Lewis who went from mid to upper 300s, down to the lower part of 300s and he looks better than ever. He’s a totally different person,” Stoops said.

That was just the start.

“You look at a lot of guys: Luke Fortner is looking thick and looking good, Darian Kinnard, really I could go on and on,” Stoops said. “I don’t think there’s one guy in that offensive line room that got fat and out of shape.”

“That’s a testament to the standards that we’ve set in that room, what’s expected of us. Coach Schlarman harping on it everyday and having so much experience and leadership in that group,” Stoops said. “It’s not just one person, or two or three or four, it was a whole group of guys that know how to take care of their stuff. I think that shows on the field and it shows off the field.”

“He’s really changed his body and he’s improved quite a bit. As you know, he’s a giant guy. He’s a big man and got himself in shape. He’s moving better and we needed that out of Nick,” Stoops said.

Brad White knows what it’s like going up against the best on a weekly basis so he embraces Kentucky’s 10-game... read more