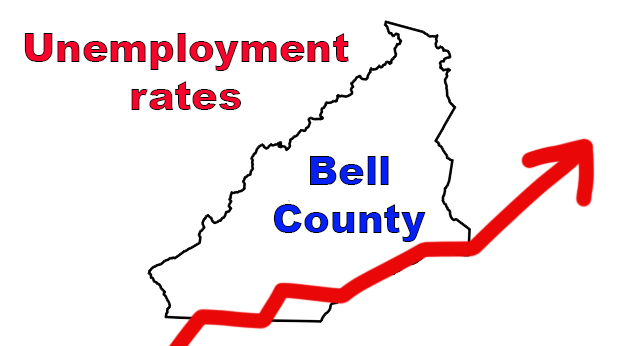 County unemployment rate is up

The jobless rate in Bell County has climbed since last month, and since this time last year.

A report from the Kentucky Center for Statistics shows that 7.9% of Bell County residents are unemployed. That number is up 2.1% from June of this year, and up 1.1% from July 2019. Bell County has a citizen labor force of 7,497 people, and 6,913 of those are employed, according to the report, leaving 584 locals without a job.

Despite the increase, Bell County Judge-Executive Albey Brock said he remembers when it was much worse.

“I can remember a time when our unemployment rate was 13%, so with all things considered being only 1.6% above the overall state average seems more acceptable,” Brock said. “Remember, this is 2020. Obviously the pandemic has had a major negative impact on our local economy, especially restaurants and small businesses.”

Across the Cumberland Valley Region, which consists of Bell, Clay, Harlan, Jackson, Knox, Laurel, Rockcastle and Whitley counties, Bell County falls in the middle of the pack. Harlan County has the highest rate at 12.9%, while the lowest rate for the region comes from Rockcastle County with 6.7%

Of Kentucky’s 120 counties, 109 of them saw an increase in unemployment rates from July 2019 to July 2020, while 10 counties saw the rate fall. Carlisle County was the lone county in which the rate stayed the same. The lowest rate in Kentucky came from Oldham County, which reported 4.2% unemployment. Carlise and Pendleton counties each came in at 4.5%. The highest rate for July 2020 is 15.3% for Magoffin County, followed by Harlan County at 12.9%.

Unemployment rates in Kentucky and employment levels are not seasonally adjusted because of small sample sizes. Statistics undergo sharp fluctuations due to seasonal events such as weather changes, harvests, holidays and school openings and closings, according to the report.

The Middlesboro News will soon have a new home. After spending the past six years in its North 11th Street... read more