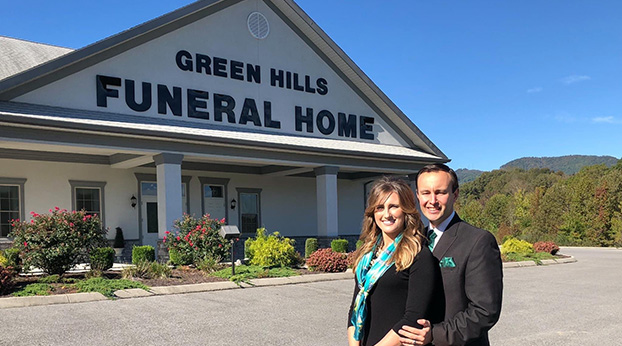 Nelson Bingham is not new to the funeral industry, and neither is his family. In addition to working in the business himself for several years, he said his family has spent nearly 50 years in the field. And his grandfather, W.B. Bingham was a longtime pastor in the area who preached more than 5,000 funerals over the years, according to Bingham.

“My family has been in the funeral business in Bell County since 1971. My grandfather was a local pastor here since the 1940s, so we have a history of ministering to people in their time of need, and we saw the opportunity here with Green Hills,” he said.

Since May of this year, Bingham and his wife, Hannah, have been the owners of Green Hills Funeral Home. He said they both had worked and served as the managers before becoming the sole owners.

“We were with the funeral home starting in August of 2016, working here as employees. Then the opportunity to purchase the funeral home became available, and we felt like it was the right time,” he said.

People will not notice any great changes in the operation of the funeral home, and since Nelson and Hannah have been the faces people see for some time now, that will continue to be the case.

“Before, we had freedom to run it just like we owned it, so things have not changed here at the funeral home. They’ll still see me and Hannah. Not only do we own it, but you deal with us. It’s completely owned and operated by us, and we’re hands-on,” he said. “You’re with us from the beginning all the way through the whole process. There’s nobody from a traffic-control tower dictating what to do. We’re hands on, we see the needs of the people, and we’re able to meet those needs, whether it’s financially, or whatever it may be, we have the decision making. It’s not a cookie-cutter operation.”

Nelson and Hannah are both Middlesboro natives and lifelong residents of the tri-state area. He said owning the funeral home is not just a dream, but a calling to serve their community.

“It’s fulfilling not just a career path, but also as a couple working together, we saw the opportunity not just to work a job, but to serve a need in the community, to minister to those in need, and to fulfill not only a dream, but a calling. We look at it more as a call to service rather than just a career,” he explained. “You’re dealing with people who are heartbroken, they’re distraught, and they’re upset. If you can bring some peace and comfort in that time of need, it’s a tough job, but it’s fulfilling and more than a job at the same time.”

While there will be no noticeable changes at the funeral home, Bingham said that is not the case at Green Hills Memorial Gardens, which the couple also purchased at the same time they bought the funeral home.

The funeral home and cemetery offer traditional burials and services, as well as a mausoleum, but Bingham said cremation and other services are also becoming popular. He said some families that choose cremation will select an urn, and then bury it in a columbarium, which is similar to a mausoleum, but specifically for an urn. Cremation has been on the rise across the nation, where it overtook traditional services last year, according to Bingham. He said in areas such as the Pacific Northwest it accounts for 80 to 90 percent of funeral services because of limited burial space, as well as expense. Locally, Bingham said they have been able to keep costs lower, and cremations only account for about 20% of the services at Green Hills.

Bingham said he and his wife look forward to continuing to serve and help people in their time of need, and they will

“I still think there’s something to be said about small town, local, homegrown people making the decisions, knowing the people, and then giving back to the community and ensuring that everything stays here,” he said. “We’re trying to bring that same approach of family to the cemetery. We’re trying to put that personal family love and atmosphere that the funeral home has become known for and bring it to the cemetery, while also bringing improvements and other services.”