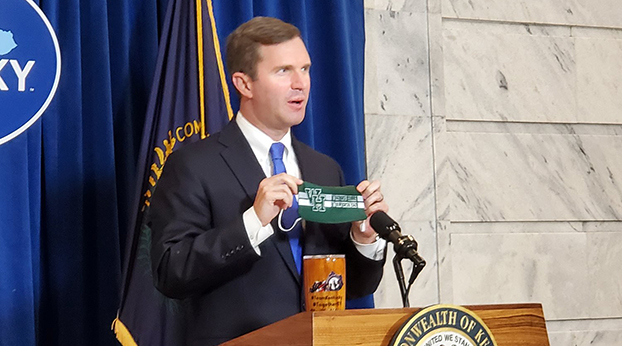 Kentucky Governor Andy Beshear shows one of the many masks he has received since the pandemic began -- this one from Western Hills High School in Frankfort --during a press conference on Monday, August 17, 2020. (Kentucky Today/Tom Latek.)

The federal government’s supplement to unemployment may be returning, Gov. Andy Beshear said during his Monday press briefing on the coronavirus pandemic.

The Governor said he received a letter from U. S. Senate Majority Leader Mitch McConnell at mid-day, “asking us to file an application, which we found online of all places,” he said.  “Apparently, under the new guidance, we can get at least $300 of the $400 for additional unemployment, for individuals to help them out without the state doing a part that made it unworkable.”

Beshear said there appears to be some confusion about the new supplement.

“I talked to about ten other governors today, and at least three of them knew nothing about this. There is a communication issue out there, not only about the existence of it but also the rules that go along with it.”

He said they have reviewed the application and have put together a draft of what it would look like.

“We do have to get clarity on a lot of points because you don’t want to jump into something without knowing all the rules.”

Beshear said he received a call from the White House late last week saying they were working on something, and the governor said he appreciates the Trump administration reaching out to him with something he hopes will work.

“I do not think this will put any more of a strain on our unemployment system than we have right now, because we have been having those additional benefits,” Beshear said. “I think our people need them.  It’s not only helped our economy it’s helped our families. So, we’re working fast. I’m for the full $600, still being provided to our citizens. If the federal government will go for $300, we’ll do it. We just want to understand it all before we sign on that dotted line.”

Beshear reported there were 376 new cases on Monday. “That’s about in line with the last several weeks of what we’ve seen on Mondays. Fifty-four of those are 18 or under.”

New cases bring the pandemic total to 39,691, with a positivity rate that climbed a bit, to 5.8 percent, based on a seven-day rolling average.

A total of 760,022 tests have been performed. Monday’s report showed that 563 Kentuckians are hospitalized, 136 are in the ICU, with 80 of them on a ventilator. Beshear said there have been at least 9,158 people in Kentucky who have recovered from COVID-19.

On July 20, the Kentucky Department for Public Health issued a travel advisory recommending a 14-day self-quarantine for travelers who went to any of the states reporting positive testing rates equal to or greater than 15 percent-of COVID-19 testing.  That list, which had been up to nine states, is now down to four: Mississippi (19.07 percent), Nevada (17.00 percent), Florida (16.44 percent) and Idaho (16.21).

Gov. Beshear plans to hold another briefing Tuesday at 4 p.m. (EDT. He expects to announce how his administration plans to report outbreaks at schools, as well as an update of outbreaks among Kentucky’s prison population.

Read about other key updates, actions and information from Gov. Beshear and his administration on the response to the coronavirus pandemic at kycovid19.ky.gov.