Kids and hot cars can be a deadly combination 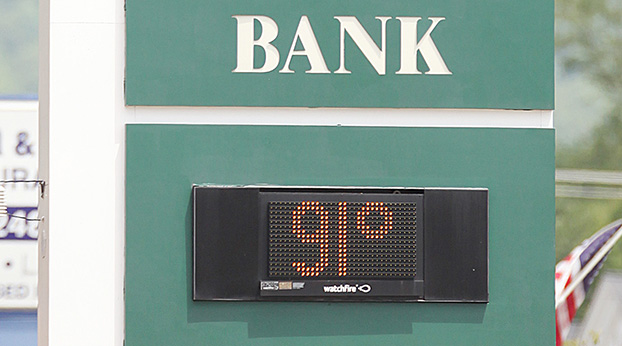 Temperatures will continue to rise throughout the summer, and with those higher temperatures also comes a higher risk for children and animals being left inside vehicles.

Children being left inside hot cars accounted for 53 deaths in the United States in 2019, according to a report from KidsandCars.org, a 501(c)(3) national nonprofit dedicated to saving the lives of children and pets in and around motor vehicles.

Fortunately Middlesboro has not experienced any such cases, but Middlesboro Police Chief Tom Busic said his department does receive complaints.

“We receive a fair to moderate amount of animal being left in vehicle complaints during hot weather, and fortunately far fewer child left in vehicle calls,” Busic said. “It doesn’t take long at all for the heat to build up to a dangerous level, particularly this time of year. Luckily we have not had any serious injuries or deaths from these calls, but the risk is always there.”

Those who leave children in hot vehicles can face charges, according to Busic.

“We have criminally charged individuals in the past with endangering the welfare of a child for leaving their small children unattended in vehicles during all different kinds of weather conditions,” he said, adding, “I would urge people to use common sense and leave their animals at home if the are going to go into a store anywhere during hot weather conditions and to always take their small children inside with them. There have been several cases in other areas of people leaving their children unattended in a running vehicle while going inside a store or gas station quickly and someone stealing their vehicle with their child still inside of it. We are fortunate in that it hasn’t happened here, but the risk is always there.”

Two Kentucky children were among the 53 deaths in the nation last year as the result of being left in a hot car, according to KidsandCargs.org. Both deaths occurred in August. One victim was a 2-year-old Corbin girl and the other was a 2-month-old Lexington boy, according to the site.

Sgt. Josh Lawson, commander of the Kentucky State Police Public Affairs Branch, said the most common reason children are left in a hot car is the parent or caregiver forget they are there. A majority of parents are misinformed and like to believe they could never ‘forget’ about their child, according to a statement from Lawson.

“As both a trooper and a father, I can’t emphasize enough the danger involved with hyperthermia,” said Lawson. “None of us want to believe that we would get so distracted with our day or other activities that we would exit our vehicle without our child. But it happens, and it happens too often.”

Lawson said it can be a matter of minutes before a child is in distress from being left in a hot car.

“Temperatures inside a car can rise 19 degrees in 10 minutes,” he said. “When you combine that with a warm-weather day and the fact that a child’s body heats up 3-5 times faster than adult, you have a recipe for disaster.

In 2000, Kentucky passed “Bryan’s Law,” which makes a person liable for second-degree manslaughter or first-degree wanton endangerment for leaving a child younger than eight years of age in a motor vehicle where circumstances pose a grave risk of death.  The law was named after 11-month old Bryan Puckett, who died July 13, 1999 after being left in a hot car by his babysitter.

Amber Rollins, director of KidsandCars.org, is hoping that technology can help reduce the number of deaths.

“We feel very strongly that because education isn’t changing anything, we need technology to prevent children from dying in hot cars,” she said.

Her company’s website added that almost all of these tragedies are preventable.

“There is a significant opportunity to protect children and pets by focusing efforts on keeping them safe in and around vehicles through risk identification, engineering changes, and education,” the site states.

A piece of federal legislation is now aimed at making changes. H.R. 3593, known as the Hot Cars Act of 2019, was introduced in June 2019. According to a summary on Congress.gov, the official website of the U.S. Congress, “This bill requires the Department of Transportation (DOT) to issue a final rule requiring all new passenger motor vehicles weighing 10,000 pounds or less to be equipped with an alert system to detect the presence of an occupant (e.g., a child or domestic animal) in a rear designated seating position after the vehicle engine is turned off. DOT must also consider requiring systems that can detect the presence of any occupant unable to independently exit the vehicle and the presence of a child who has entered an unoccupied vehicle independently.

“DOT must enter into an agreement with an independent third party for a study on retrofitting existing passenger motor vehicles with technology to address the problem of occupants left unattended in motor vehicles.”

According to a congressional bill tracking website, the bill has made its way through various committees and most recently was referred to the Subcommittee on Consumer Protection and Commerce in July 2019.

Earlier this month, U.S. Transportation Secretary Elaine Chao announced the launch of a $3 million public safety campaign to combat child vehicular heatstroke deaths across the country. The announcement is part of the Department’s ongoing work to engage with safety advocates and provide a unified message to educate the public about the dangers hot vehicles pose to children.

“As we enter the hot summer months, the department is launching a $3 million information campaign to remind drivers to never leave children unattended in cars and to lock their cars to prevent neighborhood children from entering the heated car,” said U.S. Transportation Secretary Chao.

KSP asks citizens to keep an eye out for children left in vehicles on hot days and to call 911 if they see an unaccompanied child in distress.