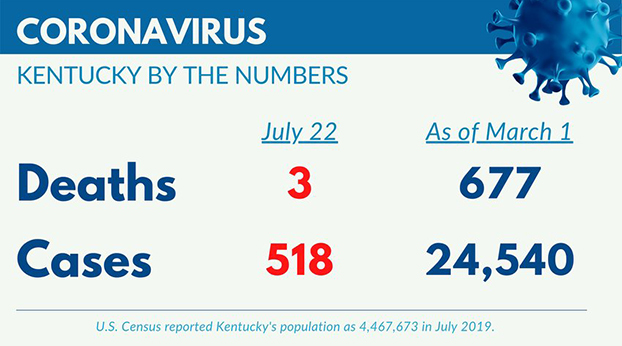 While there were still more than 500 new cases of the coronavirus reported in Kentucky on Wednesday, the number is less than many days over the past two weeks.

Gov. Andy Beshear announced 518 cases at a Capitol press conference, which raises the total to 24,540, since the first one was reported on March 6.  That includes 13 children under the age of five, and brings Kentucky’s positivity rate to 4.92 percent, based on a rolling seven-day average.

The governor says an uptick continues at childcare centers.  “We have six new facilities, bringing it up to 36 that we know of, that have at least one case associated with COVID-19.  It doesn’t mean that they are a cluster, this is the same way we report long-term care facilities.  So it’s five more staff and three additional children.”

Three new deaths were also reported Wednesday, with Allen, Simpson and Webster counties having one victim each.  That brings the pandemic total to 677.  “Sadly,” Beshear stated, “I think we need to expect that we will see in the coming weeks a significant increase in that.  More cases times the mortality rate, even if we can push it down some, is going to equal more deaths.”

Beshear said he is still waiting to see if recent steps he has taken, such as requiring wearing a mask in public, are having an effect.  “Normally, when you take a step it is going to take 10 to 14 to 16 days to show up in the numbers.”

State Public Health Commissioner Dr. Steven Stack said that despite Kentucky’s hospitals having 603 COVID-19 patients, 145 in ICU, they are helping neighboring states who are in worse shape.

“I have reports from at least one hospital that their partner hospitals, the chain they are part of, are pretty much full in Nashville, Chattanooga and multiple places in Georgia.  And, in fact, we have apparently at least one hospital receive transfers from those other states into the state of Kentucky, to help their sister hospitals in other states that are suffering more.”

On the positive side, Kentucky has now reached at least 7,000 people who have fully recovered from the coronavirus, a number Beshear says is probably much higher.

The governor had some good news on the state budget, for the fiscal year that ended June 30.

“We don’t have all the numbers in yet,” he said, “but when the books close once and for all next week, I actually believe that I will end the first fiscal year that I have been governor without a shortfall, whatsoever.”

He said General Fund collections at this point are at $11.46 billion, which is about $4 million in the red, but expects that to be made up.

Beshear pointed out it’s a marked improvement from May 22, when a revised revenue estimate expected a shortfall of $457 million.  It means no budget cuts to K-12 education, post-secondary education, and health and public safety, and no cuts to the Judicial or Legislative branch budgets.

Cost-saving moves by state agencies were also expected to result in a more than 18 percent increase of the state’s rainy day fund.

However, his outlook for the new fiscal year is not as rosy, with a $1.1 billion shortfall anticipated.  “Without federal assistance, in either a new CARES Act, providing direct budgetary assistance like they did during the Great Recession, or Congress changing the last CARES Act giving us more flexibility to use funds given us directly in our budget, we will be looking at I believe the largest budget cuts in our history.”

He estimated it could be between 13 and 30 percent. During the Great Recession, the state received $900 million, from the federal government, which would wipe out most of that shortfall.

The CARES Act money received this year, has been around $1.6 billion, according to Beshear, but there were a lot of strings attached and stipulations on how it can be used.  “Specifically, it can’t be used directly to help for lost revenue for the state due to COVID-19.”

“They have followed our lead. The step that we took is the right step. This is going to help and make Kentucky’s response more effective,” he stated. “These are two governors that I respect. This region requiring facial coverings should help all of us and it should show you that there is no political division in what is the right public health response. This is the difference between life and death.”

He also pointed to a recent analysis by Goldman Sachs that found the simple act of wearing a mask, if adopted widely, would save 5% of Kentucky’s Gross State Product, which is more than $10 billion.