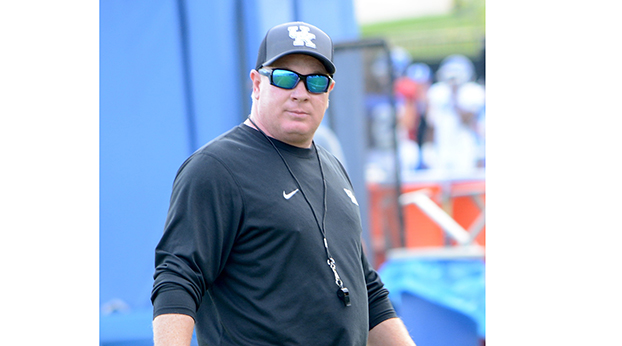 The Kentucky football team is COVID-19 free after more than a month of voluntary workouts.

The school announced Monday that 108 team members and 58 staffers tested negative for the coronavirus, while three out of 42 student-athletes in men’s basketball, volleyball, and women’s soccer tested positive for the virus through antibody tests.

The school also has implemented a campus testing plan, which consists of proactive polymerase chain reaction (PCR) diagnostic testing for student-athletes who have returned to campus.

On Monday, the Patriot League joined the Ivy League on a list of conferences that have canceled fall sports for the upcoming season. The Big Ten and Pac-12 announced last week that non-conference games in football won’t be played this year with both leagues  planning to compete in conference games.

Athletic directors from the Southeastern Conference met Monday in Birmingham to discuss the upcoming season and no final decision was expected to immediately be reached by the league’s top athletic officials regarding fall sports.

Watson is one of the team’s top defensive returnees. In his first three seasons, Watson collected 67 tackles, including 18.5 for a loss and 13.5 sacks to go along with three forced fumbles, a fumble recovery and nine quarterback hurries.

Kentucky coach Mark Stoops has a “high expectation for Boogie” this season and is counting on the senior to build on his successful junior campaign.

“He did some very good things a year ago,” Stoops said. “I think a year ago, maybe, there was some frustration with him early. He kind of just settled in and listened to coach (Brad) White, put his head down, went back to fundamentals and playing the game and enjoying it  I think he was putting a little pressure on himself early.  Boogie is a guy that has a lot of experience, played a lot of football for us, he’s one of our leaders.  We’re really excited about having him back for his senior year. “