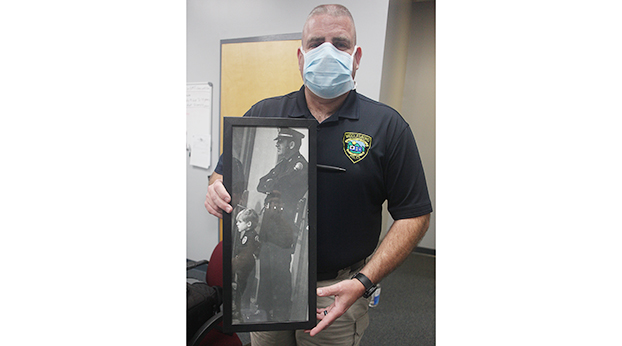 Tom Busic poses with a photo of himself with his father, Don Busic, who was a longtime Middlesboro police officer. The photo shows a 4-year-old Tom standing beside his father, with both wearing Middlesboro police uniforms. Tom’s mother made his because he wanted a uniform like his dad’s. (Jeff Moreland photo) 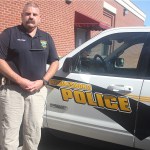 Middlesboro Police Chief Tom Busic will be retiring at the end of this month following a 20-year career in law enforcement. (Jeff Moreland photo)

Tom Busic has been around police work most of his life. He remembers a childhood where his dad, Don Busic, served as an officer with the Middlesboro Police Department, and Tom himself now serves as chief of that same department.

After 20 years in various roles, working his way up to sergeant, lieutenant, and eventually to police chief, Busic is now ready to call it a career. He will retire at the end of this month. Busic was named interim chief in March 2019 following an injury to then-chief Jeff Sharpe, who later retired, leading to Busic being named permanent chief in May of this year.

“I’ve had a ball with it,” he said looking back on his career.

“We were together from August of 2002, and we worked together until his death in October of 2010 from cancer,” Busic said. “He worked all the way up until he wasn’t physically able to, around a month before his death. He loved coming to work and would get upset when I went to work without him.”

Busic said Shadow was a dual-purpose dog, meaning he was trained to find drugs as well as track, do criminal apprehension and article searches. The two went through the K9 academy together.

“That was the most rewarding part of my career, and I still miss him,” Busic added.

He said the K9 program has done well for the department, and they are now on their third dog, with the possibility of having two dogs active this time next year.

Busic has enjoyed his career, but he has not always been in police work.

“When I got out of high school, I went to respiratory therapy school, and I was a respiratory therapist for several years. There really wasn’t much of a retirement in that, and I got burnt out doing that. I spoke with my dad, and he didn’t discourage it, and I wanted to do this. I started here in August of 2000,” Busic said.

His dad was former Middlesboro police officer Don Busic, who began his career on the force in 1961.

“He was here for 16 years, then left for a few years and worked in the coal mines to put my sister through college, then came back and finished up his retirement here. He retired right around 1990,” Busic said.

With many memories of his dad, Busic also has photos, including a picture of the two of them taken in the 1970s. The photo shows officer Don Busic, with a 4-year-old Tom standing beside him, both wearing Middlesboro police uniforms. Tom said his mother made his uniform because he wanted one like his dad’s.

When his career in law enforcement is over, Busic will not be sitting around the house. Instead, he and his wife of 28 years, Kristie, plan to travel. At the same time, Busic will begin working in a new field, one he’s been preparing for for some time now. He will be a traveling nurse.

“The last few years, I’ve been going to college on my off days and online, trying to get my nursing degree. My plan is to finish that up, and me and my wife are going to travel and work,” he said. “I’m not retiring to quit working, I enjoy working. My wife has put up with a lot of my job here for the last 20 years,” he said. “You don’t know. A lot of times you get called on your days off, or you’re supposed to get off at a certain time and something happens and you don’t get home for several hours, or maybe even the next day. She’s put up with a lot of that, and she likes to travel, so that’s what we’re going to do.”

His wife, Kristie, and his daughter, Melanie, have both endured a great deal during his career, Busic said. His daughter grew up much like he did, with a dad whose work didn’t always allow for family time, at least on a regular schedule. That’s why he made sure to have that time whenever possible.

“My daughter is 19 now, and my wife was pregnant with her while I was in the academy. She’s been around this her whole life. We’ve always enjoyed our time together,” he said. “I worked evenings, and I wouldn’t get to see them very much, but in the summer, she’d stay up late, and when I’d get home we’d go bicycle riding and things like that. You just have to make time with your family when you can. I hate to say it, but for 20 years, I put this job before I did my family. Any time the phone rang, I’d drop what I was doing and come in. That’s how you have to do it; that’s the way this job is.”

Busic said he recalls his dad’s work being the same way, and he looks forward to time with his family on a more reliable schedule.

“That’s one of the things I’m really looking forward to is spending some time with them. Some really good time where I don’t have to worry about my phone ringing all the time,” he said. “There were times we were actually walking out the door on my day off going somewhere, and the phone would ring and we’d have to come right back home. And they’ve put up with it without complaining. This job is really hard on marriages. Most police officers, there’s a really high divorce rate. I feel lucky and I feel blessed.

We’ve been married 28 years. I’m really proud of her. She’s something else.”

Despite these things that come along with the job as a police officer, Busic said he has enjoyed his work and the people he works with are like family to him.

“The biggest thing is getting to work with everybody down here. I got to work with several officers that are retired now. I learned a lot from them. It’s kind of hard seeing each one of them leave, but then you’re glad that they get to retire. I’ve had the pleasure of hiring some of our new officers. I’m really proud of them. They’re kind of like my kids now. I’ve got to promote some of the officers I worked with, and I’m really proud of them, too,” he said.

Busic’s co-workers respect his leadership, and one longtime friend and fellow officer, Lt. Joe Holder, said things will not be the same when Busic retires.

“He’s an excellent guy. He’s very intelligent and very knowledgeable on the job, and he’s been a great asset to the Middlesboro Police Department,” said Holder, who has worked with Busic for 18 years on the force. “He’s a natural leader and an excellent police officer. He’s a friend to everybody, and people love him. I can’t say enough about him, and we really hate to see him go.”

Middlesboro Mayor Rick Nelson also sang Busic’s praises, and said putting him in the role of chief was an easy decision to make.

“When the former chief, Chief Sharpe, when he was injured, then the obvious choice was Tom Busic,” Nelson said. “There were several reasons we picked him. We felt he was very honest, he has the respect of all of the men, he’s well organized, he knows a lot of the people in the community and the situation they’re in, so he was the obvious choice. Since he’s been the chief, we have rested a lot easier knowing he’s in charge.”

Nelson added that the city hates to see Busic leave the department.

“We really hate to lose him, and we threatened to handcuff him to the desk. He’s planning to get into the medical field, and 20 years has a lot of wear and tear on you in a high-stress job like he’s got. His men love him and they respect him. He can discipline someone and it’s never personal. I just don’t know what we would have done if Tom had not taken over that position when he did. I just think the city of Middlesboro…we were very fortunate to have him,” Nelson said.

Busic said working with the community was a pleasure, and the city leaders have made his job easier.

“I feel lucky to have been able to work here in Middlesboro. It’s a small enough town where you get to know a good number of the people, and the people of the community have been great to me. I’ve not had any problems while I’m off duty from people I’ve arrested or their families. I’m sure over the years I’ve made some people mad. You can’t do this job and not do that, but the support I’ve got from the community, especially since I’ve been made chief, has been outstanding,” Busic said. “I feel fortunate to work under this administration. Mayor Nelson has been really supportive of the police department, and the council, they’ve been really supportive of us. There’s nothing I have asked them for that they’ve not given us. They’ve really stood behind us, and that’s important, especially now. The sentiment of the public has changed a lot, and it’s kind of a popular opinion now against the police, but they’ve stuck right with us.”

Nelson said before he was elected as mayor and took office in January of 2019, he heard lots of comments on the campaign trail about Busic, and how he would make an excellent leader for the department. Since naming Busic chief, he said one man who had been arrested multiple times by Busic praised the chief.

“We had a guy that came up, and he had another issue. He said, ‘You did good by putting Busic in charge. He’s arrested me four or five times, but he’s always been professional. He’s always treated me good and he’s been professional every time. So you made a good choice.’ That just tells you, that’s the kind of guy Tom is,” Nelson said. “Tom is professional, he knows everybody, he knows if they’ve got a backstory. He treats them with courtesy. That doesn’t mean whoever he’s getting ready to arrest is not going to raise a fuss. But that goes a long way. He’s got that reputation of being tough but real fair, and I think that’s why the community loves him the way they do.”

With Busic’s retirement just weeks away, the city faces the task of finding someone to fill his position.

“We’ve already got the replacement in mind. We’ll have several promotions that will coincide when Chief retires. We will be naming an interim police chief,” Nelson said. “We don’t want to do that right now because I don’t want to take anything away from Tom’s tenure. We will be announcing that, maybe in a couple of weeks. The person we have is a veteran policeman and is well liked, too, and I think everybody is going to be pleased with him, as well.”

As he reflects on his career, Busic only said he only had one regret, and that was that his dad never got to see him become chief. He said that would have made him proud, but he smiled and added, “I’m sure he knows.”

The number of confirmed COVID-19 cases in Bell County has risen to 114 according to a statement issued Tuesday morning... read more