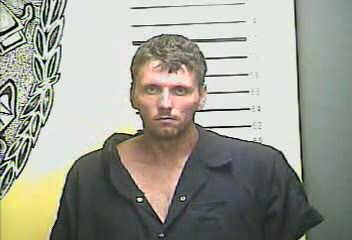 A traffic stop for a vehicle with expired platesTuesday night turned into a much more exciting event for Bell County Deputy Adam Southern.

Southern observed a white 2006 Cadillac CTS traveling on Highway 1534 with expired registration plates. He initiated a traffic stop and made contact with the driver, Timothy A. Reynolds, 24, of Coldiron, Kentucky. Reynolds exited the vehicle frantically, while sticking his hands in his pocket.

Southern issued verbal commands for Reynolds to place his hands on top of the vehicle. Reynolds eventually complied, but continued to take his hands off the vehicle, putting them in his pocket and waistband, prompting the deputy to conduct a pat down.

During the pat down, Southern discovered a small black powder pistol, and he also noticed a bag and an unmarked pill bottle sticking out of Reynolds’ front pocket, where his hands kept going. He was found to be in possession of a large quantity of Xanax pills and a quarter-sized piece of a black substance believed to be heroin.