UK coaches have served as father figures to many players 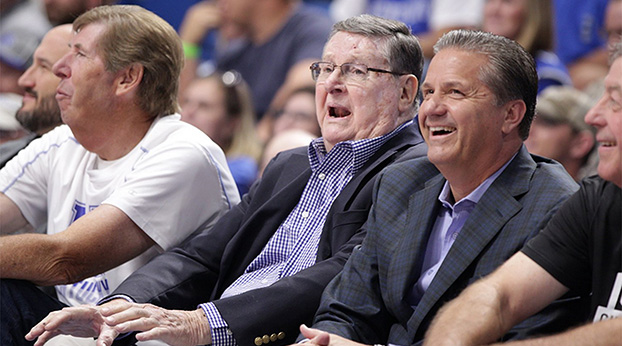 College coaches are charged with more than just teaching their respective sports. They also serve as mentors to student-athletes, many of whom are thousands of miles away from home.

Throughout history, the University of Kentucky has had some coaches who have served as a father figure to their players and juggled managing the team on and off the court and the field with ease.

The undisputed “father” of Kentucky basketball, the late Adolph Rupp, won more games than any other men’s basketball coach in school history and won 876 games and four NCAA titles. Rupp coached the same team for 41 years and is the seventh winningest coach in NCAA Division I history.

Before he became known as a college coach, Rupp played at the University of Kansas under Phog Allen, a legendary figure in Jayhawks’ history.  Allen and Rupp have an arena named after them, a unique bond between the two legendary coaches.

The men’s basketball team has had other caretakers in the post-Rupp era and none are more popular than retired coach Joe B. Hall, who has gained in popularity during the past two-plus decades and received the respect due to him after he was tasked to follow a legend.

Hall has been retired for 35 years and has served as a father-figure to current Kentucky coach John Calipari. The two coaches share a mutual respect and Calipari isn’t intimidated by Hall’s presence. In fact, he embraces the presence of Hall, especially behind the scenes.

Not to say that other coaches haven’t embraced Hall in the past, but Calipari has made it known he respects Hall and what he means to the program. In addition to Calipari, Big Blue Nation has seemingly embraced Hall more in his golden years than the later tenure of his coaching career.

Although relatively younger than his predecessors Eddie Sutton and Hall, Rick Pitino zapped youthful energy into the program during a time when the Wildcats needed it the most. Pitino’s influence resulted in a coaching tree planted by many of his former players including Billy Donovan, Travis Ford, Herb Sendek, Tubby Smith and a host of others.

Smith followed Pitino’s success and much like Pitino, he mentored players with a dose of fatherhood and could relate with modern-day era players. Smith did the impossible and won his first NCAA title in his first season at the helm.

Another father figure in Kentucky’s rich basketball history was longtime equipment manager, the late Bill Keightley, who sat under six coaches from 962-2008, Keightley was also known as “Mr. Wildcat” and was well-respected by former Kentucky coaches Rick Pitino and Tubby Smith. Keightley was one of the most prominent figures on the Wildcats’ bench during the final two decades of his tenure.

Kentucky’s basketball program not only is rooted in tradition, but is blessed with father-figure coaches and caretakers through the course of history.