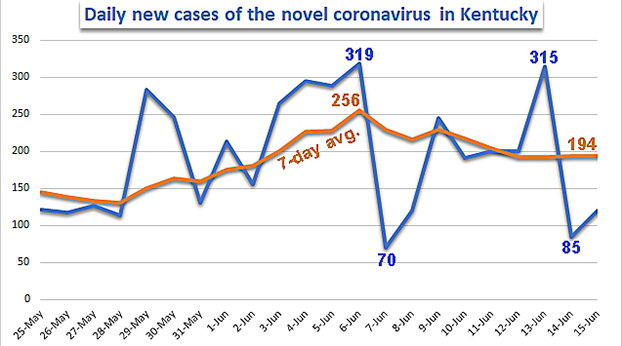 This graph shows the daily new cases of COVID-19 in Kentucky from May 25 through June 15. (Kentucky Health News)

Schools told to be prepared to wear masks, be ready for intermittent closures

Kentucky schools were told Monday to prepare for intermittent closures during the school year to come, but they still await firm word from state officials about what will be recommended and what will be required.

Gov. Andy Beshear stressed that it’s important to prepare for such closures to make sure schools have the resources needed to open and close successfully. He said closures could be “surgical,” involving just a class or a school, depending on the size of an outbreak and where it is located.

The education department posted a 10-to-15-minute survey seeking opinions of students’ families about their experiences with distance learning in the pandemic. The survey will remain open through June 24.

Coleman said the task force is working to create a culture of support for the five best practices that public health officials have repeated over and over: “wearing masks, practicing social distancing, hand sanitizing and surface sanitizing, temperature checks and contact tracing.”

She said, “We have to now contemplate how does this look in a school system . . . whether there are hundreds and maybe even thousands of students in the building at one time. And that is certainly not going to be an easy feat.”

School superintendents have warned that many parents will resist efforts to make their children wear masks. Coleman, Beshear and Health Commissioner Steven Stack all focused at Beshear’s Monday briefing on the importance of wearing masks, and adults setting examples for children.

“It is going to be imperative that our students and the kids in our communities have positive role models and positive examples to actually practice what we preach,” Coleman said. “We should never ask of our students what we’re not willing to give. And so it’s really important for not just our teachers and our education leaders, but our community leaders and our state leaders to follow these guidelines as well.”

She said each school district will have to find the best way to implement state guidelines. “It is going to be a difficult lift and I’m not going to sugarcoat that because we have children who are involved,” she said. “I know that we are going to be able to do this as we work together.”

Beshear, asked about mandates, said he expected that some things will be mandated, while others will be are highly recommended. He didn’t elaborate.

“The more a school district does, not just the mandatory, but the highly recommended, the safer it becomes,” he said. “There’s not going to be a perfectly safe option out there. We know we’ve got to get back to school, and we hope that our school districts have a high commitment to safety and do everything that they can under both the mandatory and the recommended.”

Beshear spent much time talking about the importance of wearing masks, stressing that this is not just the advice of the state Department for Public Health, but of every public health official, including President Trump’s.

“The one most important thing we can do to prevent a spike, to make our reopening go the way we want it to, is to wear a mask,” he said. “I know this has become part of what some people call it a cultural war. Folks, this is not. This is the key to keeping each other alive. It’s the key to keeping our reopening. . . . You want our kids to be back in school as soon as possible and you’re not wearing a mask? You could be preventing what it is that you want to see. I know it’s not comfortable. But when every single health official – those working for President Trump, those working for me – say this is the very best shot we have, shouldn’t we be willing to do it?”

The renewed push to wear a mask comes as several states are starting to see a surge in new cases, with little mask wearing at many gatherings. People can spread the virus without having symptoms.

Stack showed a slide comparing the surges of new cases in Arizona, South Carolina and Florida, saying they began about a month ago, which corresponds roughly to the relaxation of social-distancing restrictions in those states.

Kentucky has seen a recent increase in cases, but Stack said it’s been more of a “zig-zag sort of pattern” that over time will likely look like a plateau, largely because of the efforts of the state to contain the virus. But he also cautioned, “We are at risk, just like everybody else for that sudden increase if we take our eye off the ball.”

When prevention fails and someone gets the virus, the key is identifying them and tracking down the people with whom they have made contact.

Mark Carter, who is in charge of the state’s contact-tracing efforts, encouraged Kentuckians to “answer the call” when a contact tracer reaches out to them as a way to help decrease the spread of the disease.

He also cautioned: “This is a private process; no one will ever ask you for bank account information or credit cards or anything like that. If it happens, you need to call the hotline in the attorney general’s office and report that call. You may be asked about your address and who lives with you and things of that nature, but that’s just to identify your contacts. The fraudulent stuff with Social Security numbers and bank account information and credit cards, call the attorney general.”

Reporting after no briefing or press release on Sunday, Beshear said Kentucky reported 85 new coronavirus cases that day and 120 on Monday, making the state’s adjusted total to 12,647, with 3,416 of them recovered. Click here for the daily report.

Beshear cautioned that Monday’s numbers are likely low because fewer labs report over the weekend. He also reported that 383 people are hospitalized with covid-19 and 63 of them are in intensive care. He said last week that he would look more at those figures than the daily number of new cases as he makes decisions about reopenings.

“Right now, we believe we are basically back to a plateau,” Beshear said. “We are not increasing at the rate of those that people talk about spiking, whether you look at Arizona or Texas and some others. . . . As of now, the reopening continues, but we are watching it and we are watching it closely.”